Hyderabad: The infamous Puranapul crematorium at Bahadurpura in Hyderabad is in a state of disrepair. Since the outbreak of the COVID-19 pandemic, it has been cremating at least three victims every day, putting a strain on its resources.

Bhavani Raj Bhanu, a resident of Puranapul, has submitted a written plea to the Central ministry of housing and urban affairs requesting it to look into the reconstruction of essential amenities at the crematorium. In a letter, Mr. Bhavani said the absence of night lights and washrooms in the vicinity is causing problems to the families that visit the crematorium.

Speaking to NewsMeter, he said, “I went to the crematorium last week to perform the last rites for one of my relatives. The cremation started at 5.30 p.m and went on for another four hours. The only source of light was the funeral pyres.” He further added that the water supply at the crematorium is inconsistent, leading to a higher possibility of infection. Puranapul crematorium is commonly used by citizens of Hyderabad's Old City and nearby areas. Helpers at the crematorium told NewsMeter that they cremate close to 20 bodies every day. It is currently maintained by the Sri Agarwal Seva Samiti.

Brij Gopal Bansal, the president of the samiti, said the pandemic has increased the workload. “Our workers perform almost four COVID-19 cremations daily in an area assigned for those affected by the virus,” he said. While initially the 76-year-old was reluctant to conduct cremations for the COVID victims he said he was pushed into it by the local police in July.

He said, “We only agreed to conduct the cremations of COVID victims after we received assurance that the local municipal body will sanitise the venue after every cremation.” However, during a visit to the venue, this correspondent found several used PPE kits strewn around the premises. 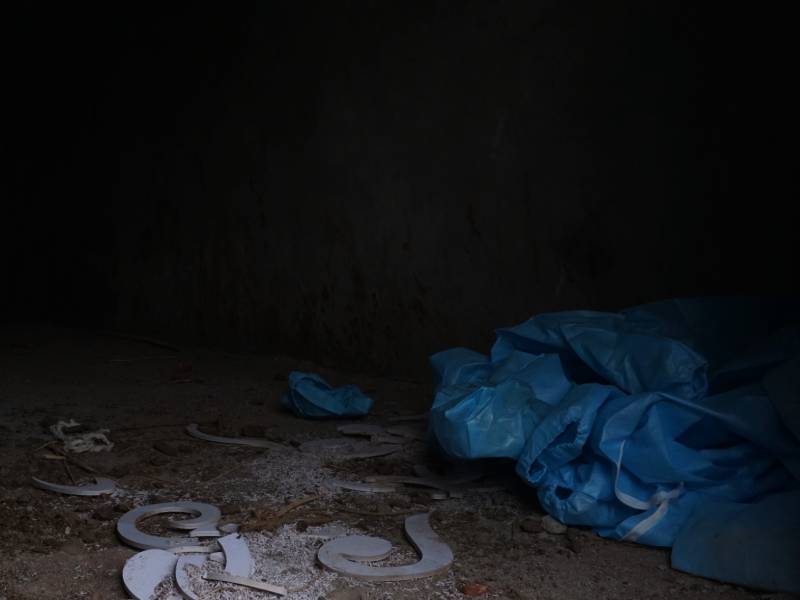 Mr. Bansal also said that there have been multiple thefts at the crematorium. “We had set up amplifiers and speakers to play religious songs and also installed some lights. But miscreants who come and get drunk in the parking area stole them,” he added. Others who are in charge of the grounds said employing watchmen would be helpful in saving costs since whatever is stolen has to be replaced through donations.

Previously, several local government officials in the area had come forward to develop the crematorium. “They discuss it during the municipal party elections but as soon as they are elected, it becomes an issue of the past,” added Mr. Bhavani.

The maintenance committee is currently working on renovating the crematorium's entrances.