Hyderabad: The parent of a student from Narayana College, Kolluru, has registered a case against the college following an argument with the college management about the fee structure. The parent also alleged that his daughter, a second-year student, has been removed from the ongoing online class following the incident.

According to Srinivas Babu Thamada, he had paid the first year fee, Rs. 1,60,000, and he was promised a discount of 20 per cent. Following the lockdown, Narayana College had started online classes for its second-year students from mid-April. 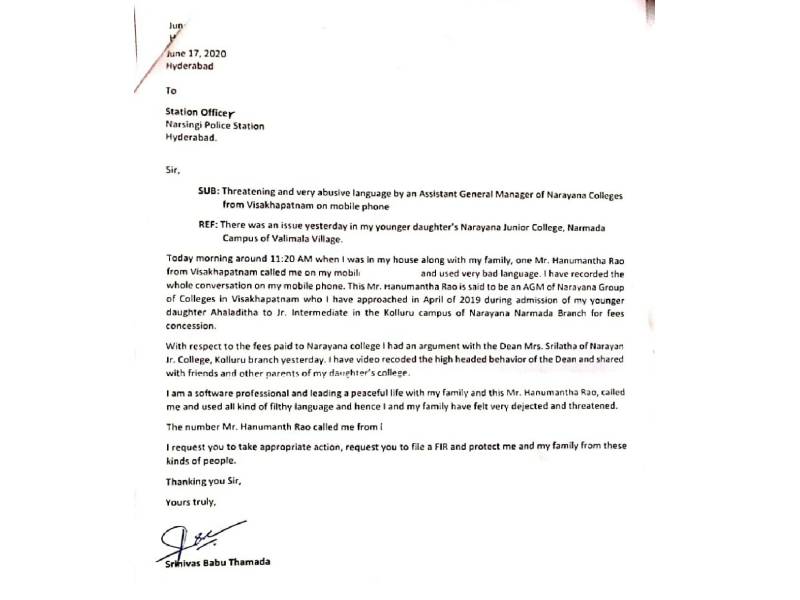 “In April, I paid Rs. 50,000 advance for the second year as per the instructions of the college. Later, I paid Rs. 13,000 for the course material. At the time of joining, the college never specified a separate fee structure for both the years. I was told that the fee is Rs. 1,60,000 which I had already paid. However, yesterday (17 June) when I went with my daughter to collect the course material, the administration demanded that I pay Rs. 50,000 immediately for the materials. That’s when I asked them for the fee structure,” Mr. Srinivas said.

He further alleged that the college refused to provide the fee structure and instead told him that the previous 20 per cent discount for the first year had been cancelled and there will be at least Rs. 30,000 fee hike in the second year. “I spoke to the dean of the college, Srilatha. She said the Rs. 50,000 advance that I had paid was to compensate the 20 per cent discount they gave me in the first year and that I will have to pay another Rs. 50,000. She said the second-year fee would be hiked by at least Rs. 30,000 and that the fee structure for the second year has not been fixed yet," he said, adding that he had not been informed of the fee hike at the time of admission. 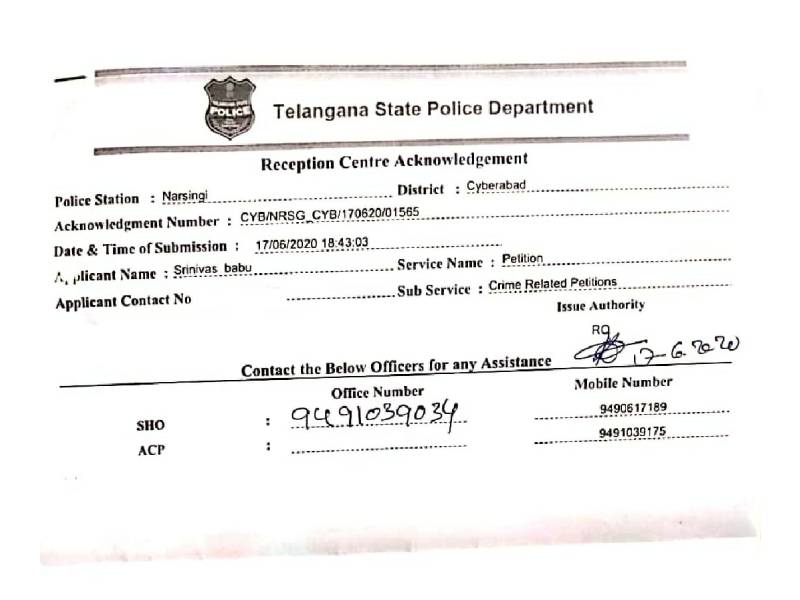 "What will I do if they suddenly say the fee has been hiked ? This is blackmail and they are trying to fleece parents who are in a helpless situation," Mr. Srinivas said, adding he finally paid Rs. 20,000 after which they handed over the study material.

He said they have already removed his daughter from the online class claiming she hasn’t paid the entire fee. "They said if we do not pay the fees she will be given a TC and we can enroll our kids in another college. Is this possible in the middle of an academic year?” he asked.

Meanwhile, in a video shot by Srinivas during an argument with the dean, Ms. Srilatha can be heard saying that no educational institution in Telangana knows the fees for the second year. "This is because the state government has not yet decided the fees. Based on the strength of each classroom the government will fix a fee slab and only then can we decide the second-year fees. Once the government decides, the college management will fix the fee structure within one week and after that, we will inform the parents. We don’t know when the state government will make a decision,” she can be heard saying.

On 1 May, NewsMeter had reported that Narayana College was insisting the parents pay 50 per cent of the second-year fees during the lockdown.

Students and parents are angry after Narayana Junior Colleges demanded semester fees despite the lockdown. “Normally we pay the fees in June and July. But today they called us and demanded the fee for the next semester. My child is in her second year. The fee for the second year is Rs. 1,40,000. They are asking us to pay 50 per cent of the fee in advance. How will we arrange such a huge amount on such short notice?” a parent said. This reveals that no parent has a correct idea about the second-year fees and each claims a different amount.

“I don’t know what’s happening with other parents. There is no contact among parents. So we don’t know who else is going through a similar situation and what the college might have told them,” Mr. Srinivas said.

Also Read
Intermediate board results at 3PM June 18th; here is the link