Hyderabad: The country's leader Dr BR Ambedkar fought against untouchability, the Constitution forbade it way back in 1950, but untouchability, also termed a national shame, still rules to the roost in several parts of India.

A shocking 49 per cent of households in northern India practise this form of discrimination, reveals a study recently published in the Economic and Political Weekly Journal. Most of the southern states had less than 20 per cent of households practising untouchability, according to authors Amit Thorat and Omkar Joshi who calculated the percentage of untouchability using Indian Human Development Survey-II (IHDS) 2012 as the base.

Thorat is an Economics professor at Jawaharlal Nehru University (JNU), while Joshi is a doctoral scholar in the Department of Sociology at the University of Maryland. The authors divided their data into several parts to analyse the prevalence of untouchability in different segments of society. The survey was conducted by the National Council of Applied Economic Research (NCAER) and the University of Maryland across 42,000 households all over the country as a part of IHDS II. Here are the key findings:

The survey revealed that 30 per cent of rural households followed the age-old practice of untouchability. In households in urban pockets, it came down to 20 per cent.

Untouchability fell as the level of education rose, found the study. Around 30% of illiterate people were still practising untouchability, while it dropped by 6 per cent among households with adults holding a graduation or diploma degree.

The authors have divided income class citizens into five groups – Poorest, Second quintile, Middle quintile, Fourth quintile and Richest. Untouchability decreased as the graph moved from the poorest to the richest class. Among the poorest, 32.56 per cent of households practised untouchability and the number decreased to 23.35 per cent among the richest. 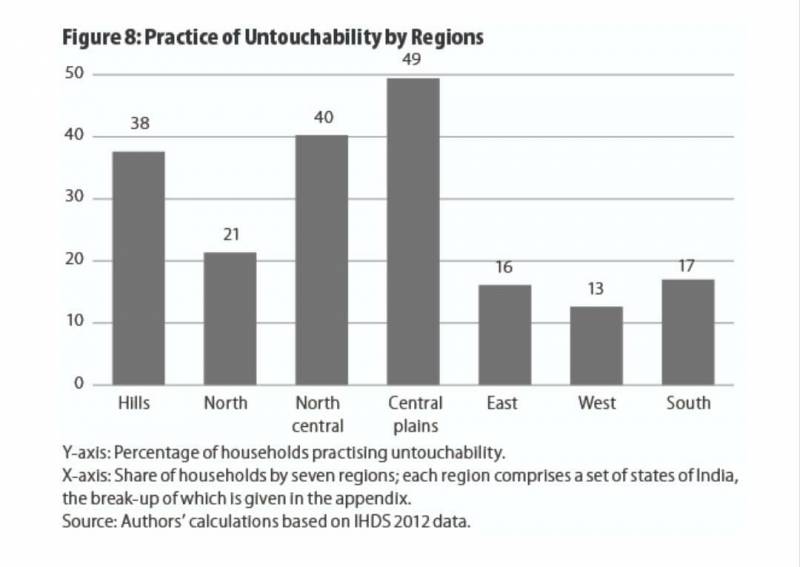 Amit Thorat, one of the authors of the study, told NewsMeter: “We have been working on this study since 2015. The partially completed study was also quoted by MP Sashi Tharoor. The study helps to understand how the practice of untouchability is still prevalent in society.”

Also Read
‘I wish to see a Bangladeshi migrate to India and become the CEO of Infosys’: Satya Nadella
Next Story