Actor Prabhas shares a thank you note on social media. Read why?

Hyderabad : Actor Prabhas on Wednesday, shared a note thanking other directors and producers who postponed the release of their movies for his upcoming film Saaho.

As many directors and producers decided to reschedule the release of their movies as the release date was clashing with Prabhas's 'Saaho' , he decided to thank all of them.

Prabhas even took to social media to share a note of thanks to all the actors, directors and producers who avoided a clash by rescheduling their release dates.

While sharing a thank you note on social media Prabhas said, “A Big Thank You to all the Actors, Producers and Directors of the films who have had to reschedule their release dates to accommodate #SaahoOnAugust30. Team #Saaho is grateful to you all and we wish you the very best for your releases. Love and respect". 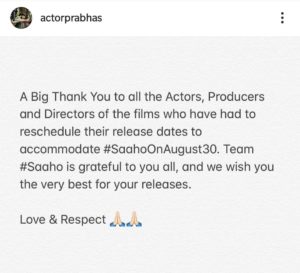 The Prabhas and Shraddha Kapoor starrer Saaho
produced by V Vamsi Krishna Reddy and T-Series' Bhushan Kumar is all set for release on August 30 in Hindi, Tamil and Telugu.