News Meter Network
Mumbai: Bollywood couple Actor Dia Mirza and Director-producer Sahil Sangha on Thursday announced separation after 11 years of married life.
The duo has issued a joint statement on twitter and they mentioned that will continue to ‘remain friends’.

In the joint statement Dia Mirza and Sahil Sangha said,” After 11 years of sharing our lives and being together, we have mutually decided to separate. We remain friends and will continue to be there for each other with love and respect. While our journeys may lead us down different paths, we are forever grateful for the bond that we share,”
Thirty-seven-year-old Mirza a native of Hyderabad and 39-year old Sangha from Manhattan New York tied the nuptial knot in 2014 after dating for few years.
The duo further added in the statement ,”We thank our family and our friends for all their love and understanding and members of the media for their continued support and request everyone to respect our need for privacy at this time,” The separated couple said that they will not be commenting any further on the matter. 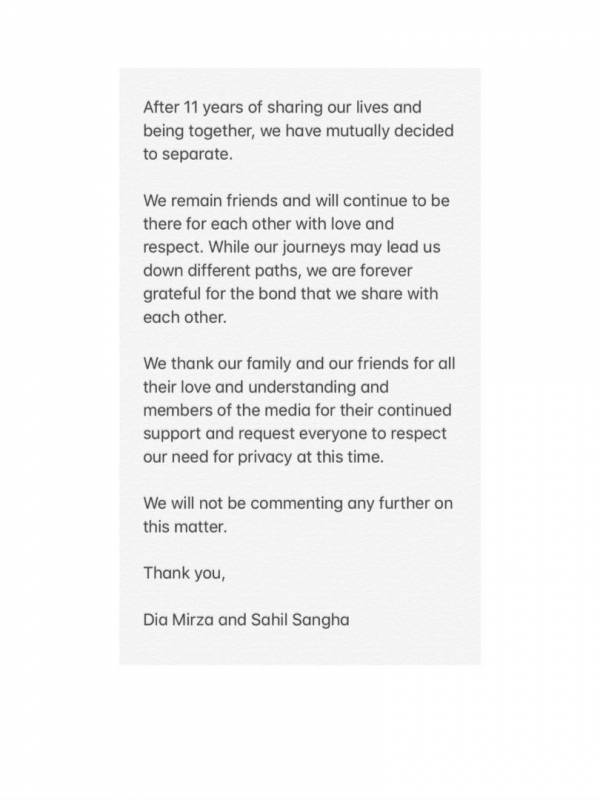 Mirza, 37, and Sangha, 39, dated for a while before tying the knot in 2014. Dia Mirza acted in films such as ‘Dum”, “Sanju”, “Rehna Hai Tere Dil Mein”. Mirza and Sangha own a production house named ‘Born Free” and they together produced films like ‘Bobby Jasoos” and “Love Breakups Zindagi’.
Sahil Sangha started his career as a marketing professional in New York and he moved to Mumbai to pursue his career in Bollywood. He worked as Assistant Director with Nikhil Advani.
Dia Mirza is a UN Environment Goodwill Ambassador and UN Secretary Generals SDGs Advocate. She started her career as a marketing executive and modelled part-time. She won Miss Asia Pacific Crown in 2000. She is an environmentalist and actively associated with several NGOs.