New Delhi: Former Finance Minister P. Chidambaram, who was produced on Thursday in the special CBI Court, has been sent to CBI remand till August 26.

Special judge Ajay Kumar Kuhar heard the arguments from both the sides and reserved the order. Around 6:30 pm, the judge sent the Congress veteran leader in CBI remand. "Considering all facts and circumstances, I am of the view that police custody is justified", Judge Ajay Kumar said.

The Court has also allowed Chidambaram's lawyers and his family members to meet him for half-an-hour daily.

It was an unusual scene at the Rouse Avenue Court complex which was jam-packed with journalists, lawyers, CBI officials and police forces. His lawyer-wife Nalini and son Karti too were present in the courtroom, which had barely a space left for any person to stand.

Chidambaram was being represented by senior advocate Kapil Sibal and Abhishek Manu Singhvi while Solicitor General Tushar Mehta was representing the CBI. The arguments saw war of words between both the sides.

SG Tushar, for CBI, opened the arguments seeking five days custody of Chidambaram. He said Chidambaram's custodial interrogation was required to confront him with all the relevant documents in order to take the investigation further.

Tushar alleged that Chidambaram took advantage of the protective cover provided by the Delhi High Court and he has been non-cooperating in the investigation.

Sibal and Manu Singhvi opposed the grant of remand. It was argued that all the co-accused in the case were on bail, and that the investigation in the case was over with the completion of a draft chargesheet. Sibal also informed the Court that the case was based on "documentary evidence.”

In their defence, Chidambaram's counsel further pointed out that the FIPB approval to INX Media "was given by six Secretaries of the Government of India, and was only endorsed by the then FM Chidambaram. However, none of the Secretaries have been arrested."

Former finance minister's counsel informed the Court that no new development in this case has taken place as Chidambaram was "called for interrogation only once, and there was no question of him not cooperating with the investigation."Justifying, calling Chidambaram only once for interrogation, Mehta said, "We had a reasonable ground to come to the conclusion that we may not be able to reach the truth unless the protective umbrella is removed. The protection was removed only in August 2019 when the Delhi HC said that the gravity of the offence committed by the accused demanded denial of bail."

Meanwhile, Chidambaram was permitted to speak. "On June 6, 2018 (the last time that he was called for interrogation),.. please ask for the transcript which were in question answer form. There is no question which has not been answered. The allegation of five million or whatever were never put to me. They only asked me if I have a foreign bank account and I said no," Chidambaram said.

Chidambaram was arrested from his Jor Bagh (New Delhi) residence on Wednesday amid high drama in connection with the alleged corruption and money laundering in the INX Media case. His son Karti, who is also an accused in this case, is out on bail. 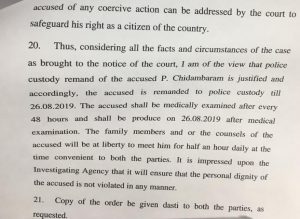