College authorities forcing us to sign petition seeking exams to be held as per schedule: PG doctors

Hyderabad: Amidst the growing demand for postponement of PG final year examinations, scheduled from June 20, the junior doctors alleged that a few private colleges, affiliated to Kaloji Narayana Rao University of Health Sciences, are forcing them to sign a document which states that they want the exams to be held as per schedule.

In a document that has come out from the Kamineni Institute of Medical Sciences (KIMS), the PG and diploma doctors have been asked to sign the document that that they do not want postponement of the university examinations. 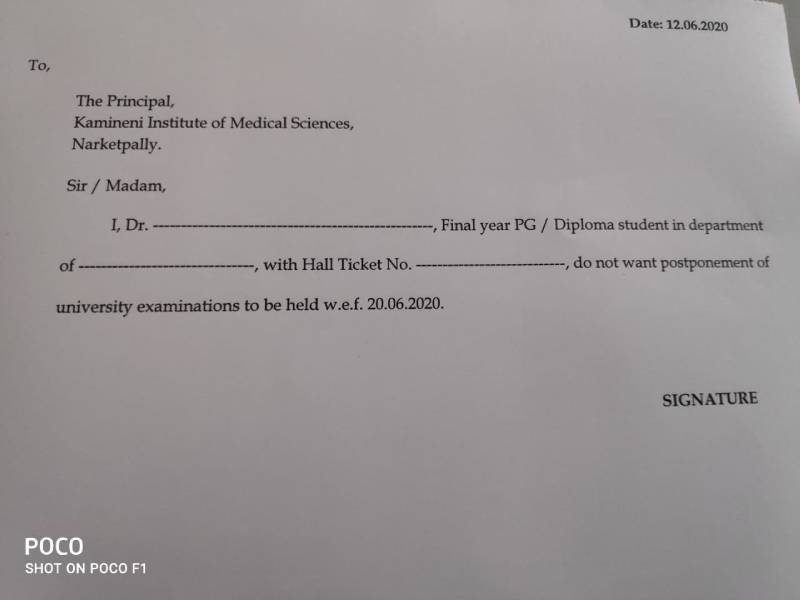 According to the junior doctors, principals of S.V.S. Medical College and Chalmeda Anandarao Institute of Medical Sciences in Karimnager are also allegedly threatening the students to sign the paper. The students also alleged that these documents will be used by the Telangana government to counter the petition filed by junior doctors to postpone the examination.

“The three-year course duration is already over for the PG final year doctors and in many colleges, the first year students have already joined. Hence, the final year students are being warned that they will be thrown out of their hostels if they insist to postpone the examinations. Many students are currently primary contacts and can be asymptomatic carriers. Most students have elderly parents, kids or pregnant women at home. If the hostels close, it is not possible for them to find an alternate accommodation as well,” says Dr G. Srinivas, a senior resident doctor of NIMS.

Fearing the mass spread of Coronavirus, PG doctors filed a Public Interest Litigation (PIL) in the Telangana High Court on June 13 seeking postponement of PG exams and continuation of their services as senior residents.

The petitioners submitted that since some colleges have not opened the hostels, doctors will have to travel from their respective homes to the exam centre every alternate day.

“For instance, Osmania Medical College hostel is presently a hot spot. Around 60 medicos, including PG doctors, are infected so far. Though screening was done and the results have come negative, we cannot ignore the incubation period for Covid-19 disease and may be, those screened can test positive after 28 days,” said a junior doctor from Osmania.

The doctors said this threatening act by the Telangana government will put more pressure on doctors and force them to take the exams even when they have symptoms of Covid-19.

“PG doctors might be able to hide the symptoms through self-medication, like what happened in OMC to avoid stigma and under pressure to finish the hasty exam schedule. We have no clue how we would travel every day. Some colleges are as far as 70 km from city. The V-C has disregarded all genuine issues with no response to our regular emails. Now, pressure is being exerted by private college principals to send signatures opposing the postponement of final year exams,” said a representative of Telangana Dental PG Association.

According to the PG doctors, each college has its own problems with which the students are putting up. Now, even if the theory exams happen there are no patients to conduct practical exams and this has been told to the Governor in today’s meeting.

“Both medical and dental colleges have been closed for months. Students wrote petition letters seeking hotel facility. We were not allowed to stay in the hostel despite paying the annual hostel fee at the beginning of the year itself. The college admins are doing makeshift arrangements and are asking students to pay an additional Rs 5,000 for staff quarter rooms for the week when exams would be held.

However we don't wish to specify names since the management is targeting students. But there is a college where a majority of students will have to travel 150 to and fro during alternate days of the exams, as they are day scholars and staying in the hostels is risky. One day before the scheduled exam, the college opens the hostel and after the exams, they throw us out of the facility. From then, it is our responsibility to face with our health problems. There is a risk that our family members might also contract the virus. Neither the V-C nor the college can be held responsible if we catch the infection. Then, why should we agree for the exams,” asked the students.

There are four government and 11 private PG colleges and eight dental PG colleges affiliated to the Kaloji University.