While addressing a gathering at the Commissioning Ceremony of the Indian Coast Guard Ship (ICGS) ‘Varaha’, the defence minister exuded confidence that ICGS ‘Varaha’ will further strengthen the Coast Guard fleet in responding to the threats of maritime terrorism, smuggling and challenges of other maritime law enforcement. He expressed his hope in ICGS ’Varaha’, emphasizing that it will enhance the surveillance and patrolling capabilities of the Indian Coast Guard and reinforce their strategic role as ‘Sentinels of our Seas’.

Highlighting Prime Minister Narendra Modi’s vision of ‘Security and Growth for All in the Region (SAGAR)’, Raksha Mantri said, “As a responsible maritime power, oceans have been the Government’s foremost policy priorities”

The Defence minister described the ICGS ’Varaha’ as a fine example of collaboration with industry and ‘Make in India’, where Larsen & Toubro (L&T) shipbuilding played a very important role in production and maintenance of our sea-based assets. The Defence minister further said, “The name ‘Varaha’ is taken from the Puranas, who was the third incarnation of Lord Vishnu which took the form of a Boar to protect mother earth by carrying her out of the sea on his tusks. It reminds us of the principle of sacrifice and rescue in the duty of saving mother earth”.

Raksha Mantri also stressed on the need to ensure availability of world-class assets, both commercial vessels & warships, in adequate numbers to achieve maritime supremacy. He said that there is no other way of providing the needed numbers than having a strong and vibrant shipbuilding industry. 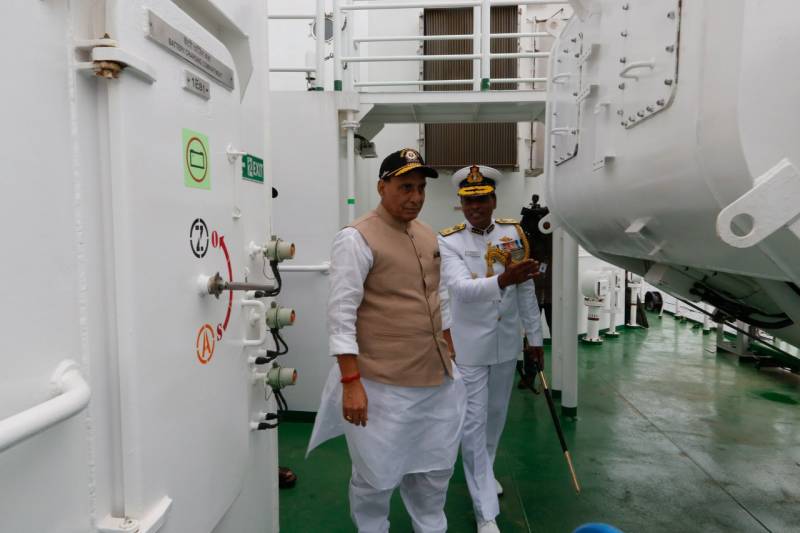 “Great fleets cannot be just bought, they have to be built”, said Raksha Mantri. Appreciating the important role played by private players in the indigenization of shipbuilding technology, Shri Rajnath Singh urged them to develop naval equipment of stringent standards.

Raksha Mantri said that the Government has taken a conscious decision to encourage other shipyards, including private yards, to enter the specialized field of warship-construction. He termed the response as encouraging.

“There are not many countries in the world that have the capability to produce such a wide variety of warships ranging from Fast Attack Craft to Aircraft Carrier”, Raksha Mantri added. The defence minister also stated that the Indian Naval Indigenization Plan from 2015-2030, as a guideline document, has been formulated in pursuance to the Government’s vision of ‘Make in India’. He said the document is aimed to enable indigenous development of equipment and systems over the next 15 years. Raksha Mantri commended ‘Swachh Sagar Abhiyan’ of Indian Coast Guard in line with ‘Swachh Bharat Abhiyan’ saying that “Clean oceans are important for India’s Economic prosperity and sustainability”. He said ICGS ‘Varaha’ can carry Pollution response equipment. He also lauded the initiatives of ICG like Community Interaction Programmes and Safety Awareness drives for the fishermen and making them the “Eyes and Ears” of a national cause.

Earlier, ICGS ‘Varaha’, the state-of-the-art offshore patrol vessel, was commissioned into the Coast Guard fleet. It is the fourth among the series of seven ships to be delivered by L&T with features like ultra-advanced navigation, communication sensors and machinery. It will operate from the port of New Mangalore on the West Coast covering Exclusive Economic Zone up to Kanyakumari.

Raksha Mantri Shri Rajnath Singh also undertook a tour of ICGS ‘Varaha’ and was briefed about the functioning of the vessel by the Director General, ICG Shri K. Natarajan.