Do you Carry your Own Bag?

Hyderabad: An independent survey, conducted by “Local Circles” found that a high percentage of people are in support of charging for paper bags as it reminds them to carry their own bag the next time. The organization surveyed over 70,000 unique consumers and based on their responses, concluded that most people are in favour of Bringing Your Own Bag (BYOB).

The organization dealing with consumer affairs conducted the survey and received responses from Tier 1, Tier 2 and Tier 3 cities in India, out of which 63% were male, and 37% were female. It asked five questions to the respondents to understand their view on BYOB.

The five questions asked were:

1. Do you or (your staff) carry bags from home when going shopping?

2. What do you do to remember to take a cloth bag?

3. Does a charge for a paper bag when checking out of the store, serve as a reminder to carry your own bag?

4. When a retailer charges you for a paper bag, what do you do?

5. Like the plastic bag, should the government pass an order allowing retailers to charge for paper bags to reduce waste generation?

Around 69% of people always carried their own bag for shopping. The survey showed that approximately 62% of people always kept a cloth bag handy in their car when they go shopping. While 13% and 16% of people kept their cloth bags near the door or in the kitchen respectively, to remember that they need to take it along with them when shopping.

Charging for paper carry bags is highly necessary, think 83% of people, they say paying for a paper bag, helps to remember that they need to carry their cloth bag the next time when they go shopping. While only 14% think that charging for paper bags, doesn’t remind them to take a reusable bag for next time.

To make it a habit for people to carry a cloth bag and to reduce paper bag waste, the government should pass an order allowing retailers, to charge for paper bags, say 63% of the people who answered the survey. While 34% of people think the government order would be of no use.

The overall survey concluded that a majority of the consumers are in support of BYOB. Local circles have also shared the results with key stakeholders, in the government, for policy changes.

Mr Akshay Gupta associated with Local Circles said, “Charging for shopping bags in retail shops is nothing new, in Europe and the United States it has been a common practice for decades. In India, big retailers by charging for paper bags are trying to reduce the use of plastic and are retaining their production costs that go behind making these paper bags.” 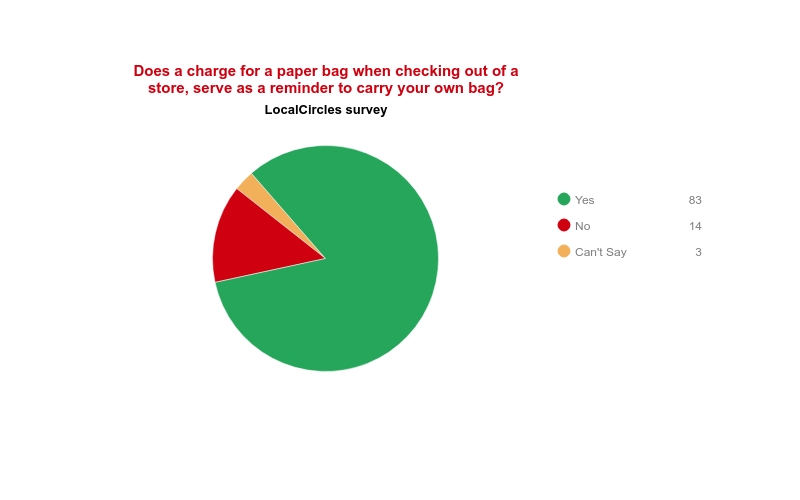