Fact Check: No, Shaeehan Bagh protestors are not celebrating the exodus of Kasmiri Pandits 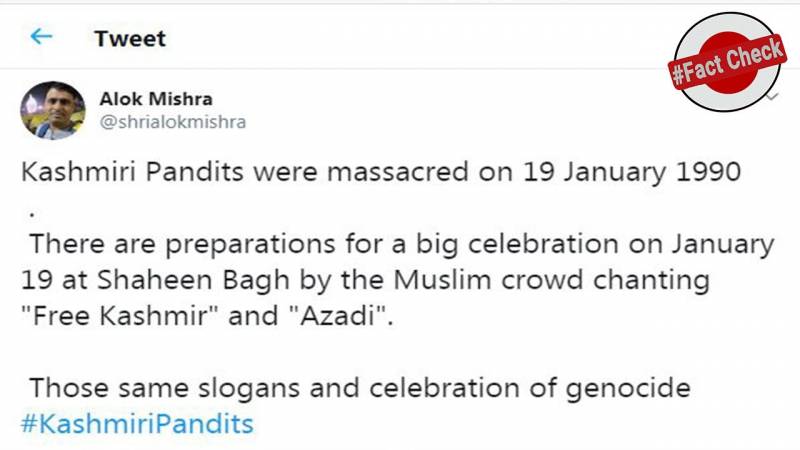 Hyderabad: Shaheen Bagh Anti-CAA protestors have garnered national attention. They announced that on 19 January at 7:30 pm citizens will gather for a peaceful protest to show their resistance via poetry and songs. As soon as this was announced many people started saying that the shaheen bagh protestors are going to celebrate the Exodus day of Kashmiri Pandits. January 19 is also considered as Black Day by Kashmir's as they were forced to leave their valley.

The Shaheen Bagh protestors started off with a group of Muslim women who raised their voices against CAA by starting a peaceful protest. The protest, which started on December 13, has blocked New Delhi's highway. The movement has gathered momentum over the last few days with more public figures joining in.

The Shaheen Bagh Protestors shared a poster saying 'Jashn-E-shaheen', but nowhere in their poster was it mentioned that they are going to celebrate the exodus of Kashmiri Pandits. A news website said that 'a day when Kashmiri Pandits were driven out of Kashmir by Islamists, Shaheen Bagh protestors to 'celebrate resistance'. This was a mis-interpretation of the poster shared by the protestors.

The official twitter handle of Shaheen Bagh protestors also shared a picture saying not to believe on the viral message. The statement said that the message being circulated is fake and they stand in solidarity with the Kashmiri Pandits. They also mentioned not believe on any of such what's app forwards.

Hence the claim that Shaheen Bagh protestors are going to celebrate the exodus of kashmiri pandits is fake.