Hyderabad: A video of protests by Muslims chanting Islamic slogans is being shared on social media as part of the ongoing protests in France. This video is a combination of two video clips where the second video clip contains visuals of water cannons and tear gas shells being used on protestors. A post about the video claimed that both video clips are from France with the caption, "France, action: They started protests on roads. Reaction: France restricts reading Namaz on roads." 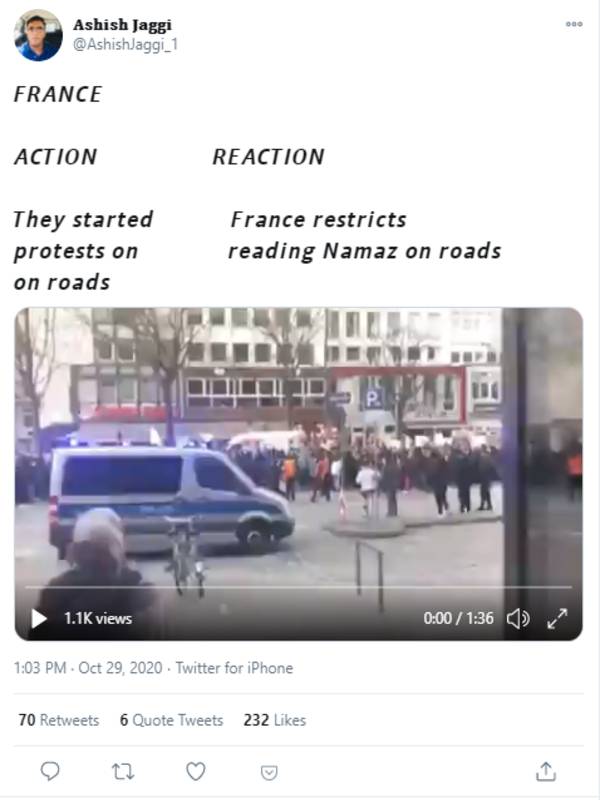 The claim that the two videos show the recent protests in France is FALSE. The first video is from Germany and the second video is from Turkey and dates back to 2012.

A reverse image search of one of the keyframes of the video led to the same video that was uploaded on YouTube on 14 January 2020. The title of the video read, "Uyghur demo in Hamburg".

Taking a cue from the title of the video, NewsMeter performed a keyword search and came across a news report by NDR, a Hamburg-based radio and TV network. The article was published on 11 January 2020 and was titled "Demo against the oppression of the Uyghurs".

According to the report, "Around 2,000 people in Hamburg-St. Georg demonstrated against the suppression of the Uyghur ethnic group in China. According to the police, the rally was peaceful." The keyword search also led to photos from the demonstration published by the Alamy website which match the visuals from the viral video.

While the Alamy stock photo is taken from a different angle, we can still see the similarities in both the images.

So, from both the news reports and visual analysis, NewsMeter can conclude that these protests were from Hamburg, Germany, and took place in January 2020. It is not related to the ongoing protests in France.

The video of water cannons and tear gas shells being used on people is from Turkey and dates back to 9 November 2012.

A reverse image search of one of the keyframes of the video on Yandex led us to the same video on YouTube uploaded on 9 November 2012. The video title reads, "Civil Friday prayer with gas bombs - Yüksekova."

The full description of the video states, "The events that took place during the 'civil Friday prayers' in Yüksekova district of Hakkari put those who prayed in a difficult situation." It should be noted that both Yuksekova and Hakkari province are in Turkey and not France. Also, the video was uploaded in 2012 and hence is not related to the ongoing protests in France.

NewsMeter also did a relevant keyword search on Google and came across a news report by Haber Turk published on 9 November 2012. The article said, "Police intervened a group of students who closed the highway to traffic by sit-in to support the hunger strikes in Yüksekova district of Hakkari. The events intensified with the shooting of gas bombs in the area where the Civil Friday prayer was performed."

The article also featured pictures from the incident which are similar to the visuals from the viral video.

Finally, both videos are old and not related to protests in France. The first video is from Germany whereas the second video is from Turkey. Therefore, the claims are FALSE.

Also Read
Fact Check: Liquor bottles in viral image are not from Dubbaka but from Thailand