Hyderabad: A photo allegedly showing Maharshtra's first Muslim woman SP from an Urdu-medium school has gone viral on social media. A few social media users also pointed out that she is not following the official dress code for policewomen and is wearing a hijab instead.

NewsMeter received requests on WhatsApp to fact-check the viral image. Below is a screenshot of the claim. 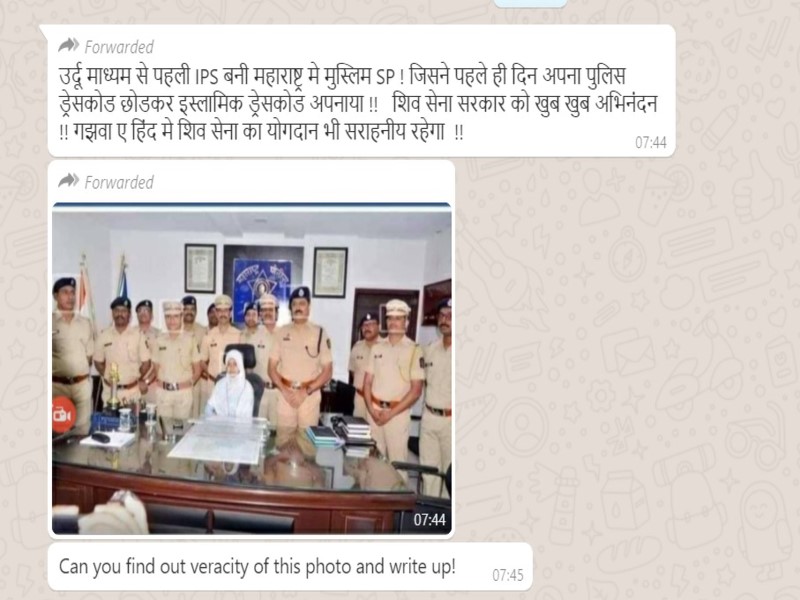 NewsMeter performed a reverse image search and found the same photo had been posted on Facebook on 5 March 2020. According to the post that accompanied the photo, a Muslim girl in Maharashtra had been appointed the superintendent of police for a day. The girl was a student of Malakpur Urdu High School.

Using this information, NewsMeter performed a keyword search and found the viral photo in a news article by Deshdoot, an online website of a Marathi newspaper. It was reported that the girl was made the DSP for a day in Buldhana to commemorate the International Women's Day.

NewsMeter also found a YouTube video by Navbharat Times and Mumbai Times which also reported that a 14-year-old girl was made DSP for a day in Buldhana district of Maharashtra. The incident took place ahead of the International Women's Day and was part of an initiative launched by Buldhana collector Suman Chandra.

Below is a comparison between the viral image and a still image from the YouTube video. To mark the International Women's Day, female students had been appointed acting SP, DSP, collector, and various other officials for a day in the district. The girl in the photo was a Class IX student.

Hence, the claim that the viral photo shows the first female Muslim SP from an Urdu-medium school is FALSE.