Hyderabad: In the past few days, controversial polls are going viral on Twitter. They are passing off as polls by Republic Tv, misleading the users into sharing the polls. These polls were shared in the name of Republic polls. 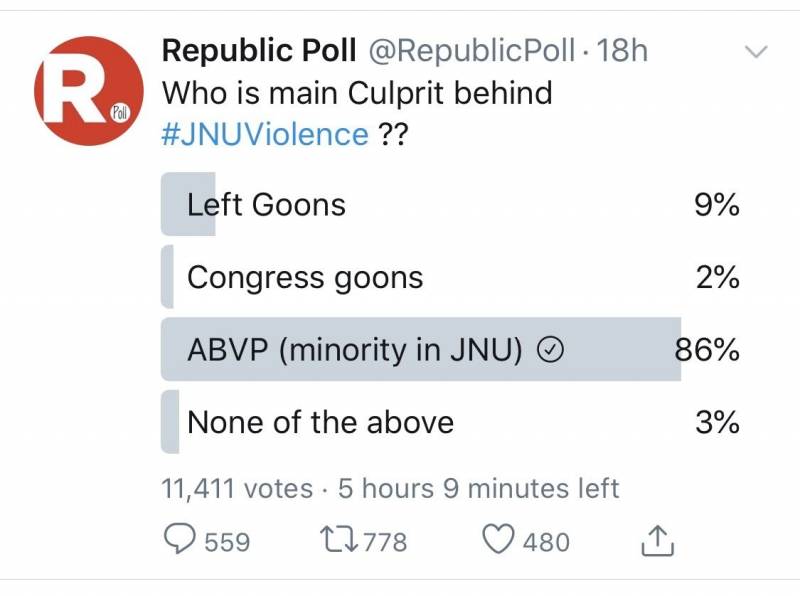 One such poll is ‘Who is the Culprit behind #JNUviolence ??’ with options

4. None of the above

Many Twitter users shared this poll frantically commenting the poll with the use of words like ‘Goons’ and ‘Minority in JNU’.

She came down after she saw your poll pic.twitter.com/1gj4FvNKJ8

@republic that was a really good poll. But I think now you can say it is a perception not the truth? What do you say about this poll?

@republic that was a really good poll. But I think now you can say it is a perception not the truth? What do you say about this poll? pic.twitter.com/QNSj1wYSUb

Many users mistook the polls are from official Republic TV account conducting the polls. But these misleading polls are not on the Republic TV Twitter handle, which is @Republic. The handle that posted these polls is @RepublicPoll.

Republic poll offers polls on very controversial topics and options. It has 2,746 followers.

Some of the polls by Republic polls are

Fact Check: Claim in video stating that there is no COVID-19 pandemic is false

Fact check: Photo of Nigerian protests passed off as ‘Justice for Sushant’ march.

Fact Check: Video of Nitish Kumar’s convoy attack from 2018 shared with false claims ahead of polls

Fact Check: Old incident of murder of gang-rape victim, her mother from UP passed off as recent

Fact Check: Viral photo of BJP goon beating up cop in Bengal is from Uttar Pradesh