Hyderabad: The GHMC, on 28 July, slapped a fine of Rs. 4,000 on renowned director Ram Gopal Varma after he put up posters of his upcoming film "Power Star" on government property. The municipal body said he had flouted the GHMC Act and alleged that RGV had used government property to promote his film. 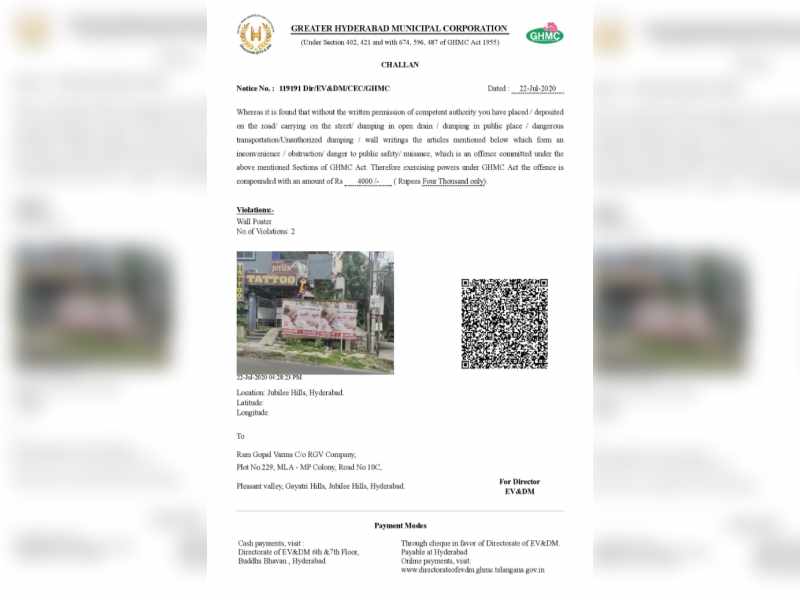 RGV's film has sparked a controversy as Tollywood star and Janasena leader Pawan Kalyan is fondly called “power star”. The director, however, has denied that the movie is based on the actor-politician. The trailer, that was leaked online earlier this month, had angered Pawan Kalyan fans. The trailer has 6.2 million views on YouTube.

On 23 July, a group of people had attacked the director's Jubille Hills home. RGV had indicated that the attack was a response to his upcoming movie. “P k fans claiming to be janasena members attacked my office and they have been thrown out into the lockup by my guards and Cops. I want to kiss and make love to them for giving me more publicity for POWER STAR (sic),” the director had tweeted.

Also Read
My advocates will reply to the case filed against me: RGV

'Better late than never': Here is the revised speed limit for vehicles in GHMC area