Hyderabad: After the new set of rules introduced by English and Foreign Languages University (EFLU) admin, University of Hyderabad has come up with a new circular against ‘defacement’ of public property and guidelines on holding protests.

The circular, issued on January 29, asks students of the central university to “make use of designated boards spread across the campus for democratic expression of their views, without defacing the walls and physical structures of the university.”

Saying that the university has earmarked several spaces within the campus for holding public meetings and demonstrations, the circular further added that students should “exercise their freedom in a peaceful manner without obstructing regular activities in public spaces meant for all sections of the university.”

The circular comes in the wake of the recent ‘white-washing’ exercise that the admin had undertaken in the campus. In a series of steps, the authorities had painted over portraits of Ambedkar and Rohith Vemula, near the Social sciences Building on January 21. Incidentally, on the eve of Rohith Vemula’s death anniversary, quotes from the preamble of the Constitution were also white-washed, on January 16. While the graffiti on the walls within the campus is illegal as per the rules mandated by the varsity, several students believe that this is an attempt by the university to curb freedom of expression in the campus. Gopi Swamy, General Secretary of HCU Students' Union said, “Till 2016, there were no such restrictions imposed by the university. Post Rohith Vemula movement, the admin had become scared and as four years passed after the whole struggle, they have begun intimidating students. They are pressurizing students not to gather in public places, and protest in Gurbaksh Singh Maidan, where no one comes or cares. The vibrancy that I witnessed in HCU, academically and politically, when I joined in the year 2013, has gone now. The BJP is putting all their efforts to clamp down students' voices." Some say that it is the effect of the anti-CAA protests in the country. “With the anti-CAA protests, which have been gaining momentum in the country, as well as within the university, the admin is pressurized to bring such circulars. They want to remind us that we should protest only in the spaces they want us to. But that’s not how democracy works,” said Ananthu, an M.Phil student.

Speaking about the graffiti of Rohith Vemula and Ambedkar being removed, Iniyavan Banumathi, president of Ambedkar Students’ Association said, “Graffiti, paintings are normal in all campuses. It should be seen as a creative expression of dissent. But it seems as if the admin wants to ‘purify’ our campus, remove all symbols of Rohith because it makes them insecure.” 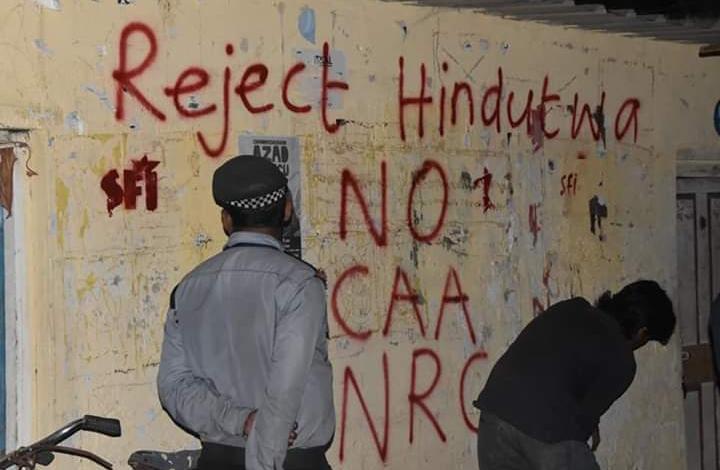 This is not the first time that the university has taken down graffiti and instalments. Last year, in January, the administration removed ‘Velivada’: the structure erected by Dalit scholar Rohith Vemula and four other students at North Shopcom after they were suspended from the university and their hostel in 2016. While the structure remained intact for three years post Rohith’s suicide, the university had removed them in the middle of the night on January 6, 2019.

Meanwhile, several student unions gathered near the Admin block of the University of Hyderabad to protest on student issues, including ban on public talks and gathering without loudspeakers at the campus. They also voiced out against the bifurcation of student union fund. The students also said that almost 45% of the students in university are from poor background and face issues with medical insurance whenever fall sick, as they have to shell out money from their own pockets, even after university providing the insurance. The students claimed that they are getting little or no help from university in resolving the issues.