Hyderabad: The vigorous southwest monsoons have claimed 87 lives across four states and over thousands are reportedly to be missing due to landslides. The highest number of casualties were reported from Kerala with the death toll at 42. The government has shifted more than a lakh of people to relief camps. Former Congress president Rahul Gandhi’s Constituency Wayanad in Kerala is one of the most affected. 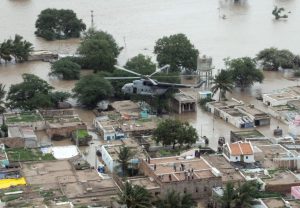 In Gujarat, a building fell due to the torrential rains killing four while several are trapped under the debris. Karnataka continues to battle with very heavy rainfall, and the IMD had issued a red alert for the city of Bengaluru. Chief Minister B.S. Yediyurappa is likely to hold a press conference at noon on Saturday to brief the people about the current situation.

The Central government has pressed into service 53 disaster response teams to carry out rescue operation in Maharashtra, Karnataka, and Kerala.

Meanwhile, a well-marked low pressure has developed over southeast Rajasthan and adjoining Gujarat. It will move to the west and weaken, leading to decreased rains over Gujarat. “Today we expect scattered to moderate rainfall to continue over Kutch, after which there will be a significant decrease,” Mr. Mahesh said.

Kerala will continue to receive rains, as the IMD has forecasted. Thunderstorm accompanied with moderate to heavy rainfall with wind speed reaching 40 to 50 kmph are likely to occur over Kozhikode, Malappuram, Thrissur, Alappuzha, Kottayam, Idukki and Ernakulam districts.
Congress leader and Wayanad MP Rahul Gandhi will be visiting the constituency on Sunday to oversee the rescue operations.

“Kannur received the highest rainfall of over 137 mm, followed by Kozhikode 135 mm, Karipur Airport 171 mm, Kochi 48 mm, Alapuzha 71 mm, Punalur 40 mm and Thiruvananthapuram received 101 mm rain. We except a gradual reduction in the rains and significant relief from August 12,” said the weatherman.