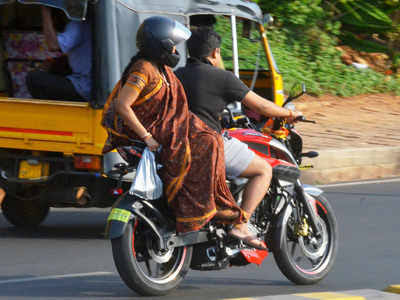 Hyderabad: As road safety tops the priorities of Telangana police, especially for two-wheelers, they have mandated pillion riders to also wear helmets. While Rachakonda Commissionerate has commenced its implementation, Cyberabad Commissionerate is likely to begin it in a couple of days.

Recent reports of road accidents in Telangana have revealed that deaths involving bikes top the fatality rate, which accounts for a spine-chilling 70 percent.

It has often been noticed that pillion riders are the most affected in such mishaps. Although, wearing a helmet was made mandatory, there has not been any serious check for such lapses.

With an aim to improve safety of pillion, the police have come up with this proposal. The practice which is already in place in Bengaluru has helped minimize the number of casualties in road accidents.

Rachakonda police, in a week since the rule’s launch, have registered over 250 cases against pillion riders without wearing helmets.

Senior police officials of Rachakonda Commissionerate said that this is yet another safety measure for the bikers and pillion riders.