A monthly show where the PM discusses topical issues, Mann Ki Baat, is usually looked at as a mode of communication between him and his viewers. It is broadcast every month on two Youtube channels, one that is the Prime Minister's official channel, and the other of his parent party, the Bharatiya Janata Party. Screenshots of the same are being posted on Twitter with hashtags such as #StudentsDislikePMModi and #Mann_Ki_Nahi_Student_Ki_Baat.

This comes after the Supreme Court recently quashed all petitions requesting a postponement of National Eligibility Entrance Tests and Joint Engineering Examinations. The National Testing Agency has decided to conduct JEE from September 1-6 and NEET on September 13.

The comments section in both Youtube video was also filled with students requesting postponement of the exams to a later date. The also criticised him for not mentioning about student's concerns with the entrance exams. 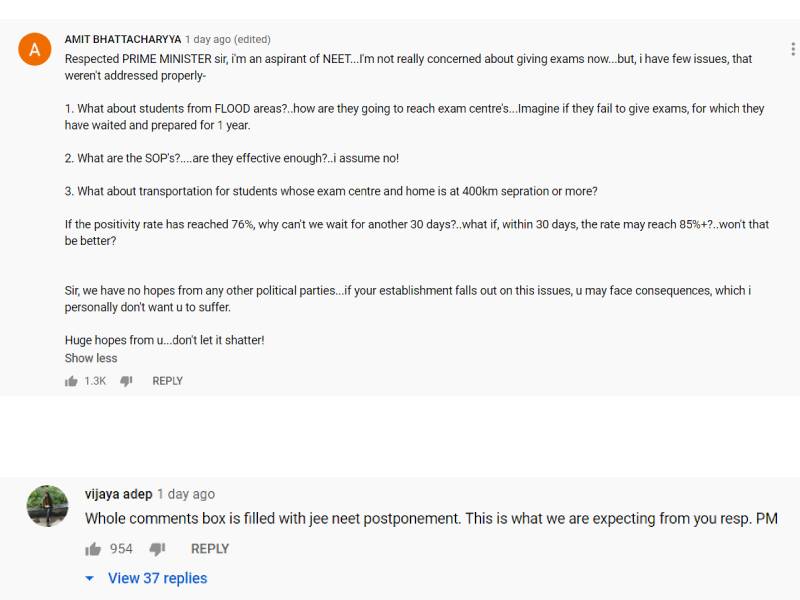 As per Youtube tracker Social Blade, this week's Mann ki Baat is the lowest rated video on both the channels.

The Supreme Court, on Monday, August 17th, dismissed the petition demanding the postponement of NEET and JEE entrance exams and concluded that they would be held in September, as per schedule.

Also Read
UGC final year exams can only be postponed, not cancelled: SC