By Anusha Puppala Published on Aug 22, 2019 at 9:37 pm
Share On:
Hyderabad: The villagers in Telangana’s Rajaram village in Jagtial district held a novel protest on Thursday where they were seen carrying placards during a funeral procession. The reason for this novelty, you ask? The villagers were holding out this protest demanding Rs. 5 lakh ex-gratia from the Telangana government for Gulf migrant workers who had died in Gulf countries.
The protest was led by Goli Srinivas, a Gulf returnee and migrants rights activist during the final ritual procession of Anumalla Lachaiah, a migrant worker.
The 49-year-old Anumalla Lachaiah, a migrant worker, who hailed from Rajaram village had died in Saudi Arabia due to a heart attack recently. His mortal remains arrived to the village on Thursday. Villagers protest during the funeral of 49-year-old Anumalla Lachaiah, a migrant worker
The family members, relatives, friends and the villagers participated in the final rituals. Goli Srinivas also organized a Facebook live of the funeral. He demanded for a comprehensive NRI Policy by the state government.
The Gulf returnee Srinivas and also a migrants rights activist led the protest. “I have worked for about eight years in Qatar as a house driver and I have seen many migrants suffering due to different problems in Gulf countries. But even after so many years of the formation of Telangana state, the state government has till date never done anything for the Gulf migrants from Telangana,” he told Newsmeter.
“The relatives of Anumalla Lachaiah had to ask for donations to get his mortal remains back to India,” he added. 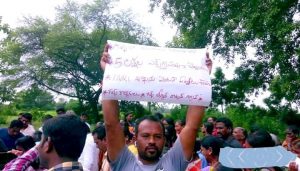 Activist Goli Srinivas demanding with Placard
“Apart from facing several problems in Gulf countries, the family members of many other people are also struggling to get back the mortal remains of their loved ones. We demand Rs. 5 lakh ex gratia from the Telangana government for Gulf migrant workers who have died in Gulf countries. The government should also help the families of the deceased.”
M Bheema Reddy, President-Emigrants Welfare Forum said, “The TRS promised the welfare of gulf migrants in its election manifesto in 2014, but has not implemented that till date. The then Telangana NRI Minister KT Rama Rao convened a meeting on July 27, 2016 and took inputs to from NRIs, Intellectuals, trade unions, civil society and recruiters to formulate an NRI policy, but so far no positive steps have been taken by the government.”
“Poverty, distress in agriculture sector and lack of job opportunities in combined Andhra Pradesh had forced the unskilled workers to travel trans-borders seeking employment. There was large scale migration of Telangana workers to Gulf countries, Singapore and Malaysia due to several pull and push factors. As per a conservative estimate, about 12 lakh emigrants out of 81 lakh Indian emigrants in the Gulf are from Telangana.”
Activists and Emigrants Welfare Forum demands the implementation of the Telangana NRI Policy with the following demands:
* Rs. 500 crore annual budget for Gulf workers welfare fund
* Rs. 5 lakhs ex-gratia for the families whose sole bread earner died in the Gulf countries
* Establish Gulf Workers Corporation with a Welfare Board
* Legal aid for Gulf workers who are languishing in foreign jails
* Continuation/retention of ration cards and Arogyasri scheme to Gulf workers
* ‘Pravasi Yogakshema’ scheme to cover life, accident and health insurance & pension
* Rehabilitation and reintegration for Gulf returnees by providing financial assistance
* Regular monitoring of recruiting agents to prevent human trafficking