New Delhi: The Indian Army, in its continued focus to rehabilitate the ex-insurgents, facilitates them with self-employment projects in Assam. One such recent project is “manufacture of Tamul plates” now being operationalised at Borrangajuli village in Tamulpur district.

As a pilot project, a few ex-cadres are being engaged in making of these bio-degradable and cost-effective Tamul plates which can be used in catering services to serve meals in offices/institutes or at any social gatherings.

The project was conceived and executed by the Indian Army, in coordination with Aseem Foundation, a Pune-based NGO. “The project largely aims at improving economic conditions and providing an opportunity to earn through self-employment for these ex-cadres,” said Lt. Col. Harsh Wardhan Pande, spokesperson, Ministry of Defence, Tezpur.

The project is currently providing employment to ex-insurgents and there are plans to further expand in terms of scale and scope. To augment this project and its capacities, additional machines are also being purchased this year.

The Pune-based NGO - Aseem Foundation is planning to market the product in Maharashtra and Assam thereby generating more sales and revenue which could improve financial condition of the ex-insurgents. 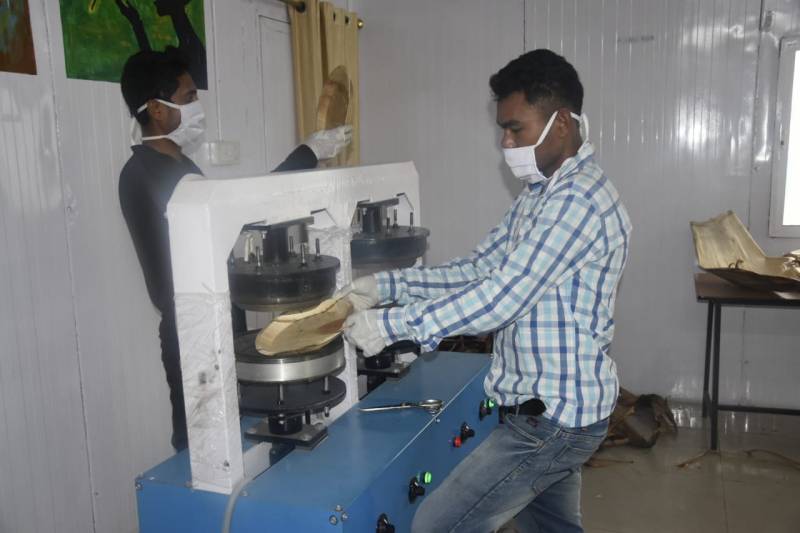 Meanwhile, the venture has already transformed the life of D. Sagar and Roshan Chhetry as they have realised their inner potential and contributed financially towards their personal and family needs. The raw material for the plates is collected from farms located in remote villages and the finished product is supplied to establishments and institutions as far forward as possible. The success of the pilot project can be gauged from the response of the locals who have requested to replicate the project in many more areas.

dignified earning and living. The villagers are also excited since the Tamul leaves and barks which were earlier being thrown as waste are being commercially made viable. The local youth are being engaged for collection and stocking of raw material to help the teams.

The success of this project will stimulate mushrooming of more such ventures leading to Engagement – Empowerment – Employment of the youth of Assam. This project will further facilitate constructive mainstreaming of more ex-cadres and contribute towards Surakshito, Vikashito, Sarbashrestha AXOM.

Also Read
We are not at war with China but prepared for any contingency: IAF chief RKS Bhadauria