Three iconic India-Bangladesh matches in the history of Cricket

Hyderabad: Talking about rivalries in the history of the gentleman’s game, the Indo-Bangla rivalry has been a spectacle to watch with India and Bangladesh putting up a spectacular show in all three formats of cricket.

Off late, Bangladesh has managed to pull off some of the most significant spoilers that a fan could imagine. They have beat giants like India, Australia, and England in various formats of the game. Now let us have a look at three such India-Bangladesh matches that have been etched in every cricket fan’s mind.

The beginning of the developing rivalry between India and Bangladesh started 12 years ago. Considered as a minnow, Bangladesh came into the match as a clear underdog. India had stalwarts like Sachin Tendulkar, Sourav Ganguly, and skipper Rahul Dravid on their side. While it looked like a cakewalk for the men in blue, the Bangladeshi bowlers rattled the Indian Batsman by picking wickets at regular intervals.

India was bundled out for a mere 191 with Sourav Ganguly top-scoring with 66. Mashrafe Mortaza was the pick of the Bangladeshi bowlers as he scalped four crucial wickets, and Abdur Razzak and Mohammad Rafique picked three each.

The Bangladeshi batsmen had a considerable target to chase and pull out an upset of the lifetime. They were just 192 runs away from a shocking victory at cricket’s biggest stage. With crucial fifties from young Tamim Iqbal, Mushfiqur Rahim and Shakib Al Hasan, Bangladesh managed to defeat India and make a statement at the world stage. 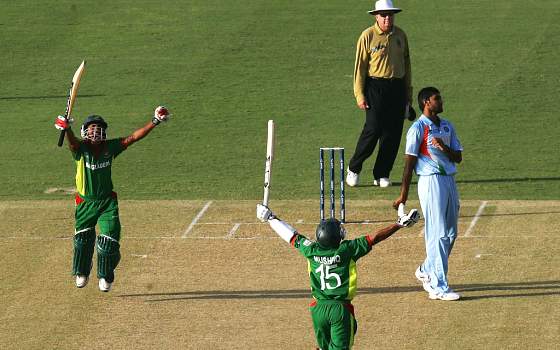 Moving ahead to the next iconic match between these two, we go back to the 2016 T20 World Cup held in India. Playing at their home, India was considered as the favourite to win the tournament.

In what is known as a batting paradise at the Chinnaswamy stadium at Bengaluru, things went the other way, as India couldn’t even reach the 150- mark. The Bangladeshi bowlers restricted them to 146 in 20 overs. India’s Suresh Raina scored 30, the highest for the team, and Bangladesh’s Mustafizur Rahman picked two wickets.

With a small target to chase, Bangladeshi batsmen kept losing wickets at one end as the runs kept flowing at the other. Crucial knocks from Tamim Iqbal, Sabbir Rahman and Shakib Al Hasan changed the scenario. Bangladesh required 11 runs to win from six balls with Mushfiqur Rahim and Mahmudullah on strike. In a surprising and backfiring move, the ball was handed to Hardik Pandya.

With the pressure increasing with every delivery, Pandya leaked nine runs from the first three deliveries. The equation was down to two runs from three balls as Mushfiqur Rahim already started celebrating.

However, this was short-lived happiness for Rahim and Bangladesh as Pandya picked two wickets in two deliveries. Both Rahim and Mahmudullah were back to the pavilion, as Bangladesh required two runs from one ball.

An MS Dhoni spectacle behind the stumps on the last delivery resulted in a run-out and India won the nerve-wracking encounter by the rarest of margins — one run. Bangladesh couldn’t handle the pressure and failed to register their first-ever T20 victory over India. 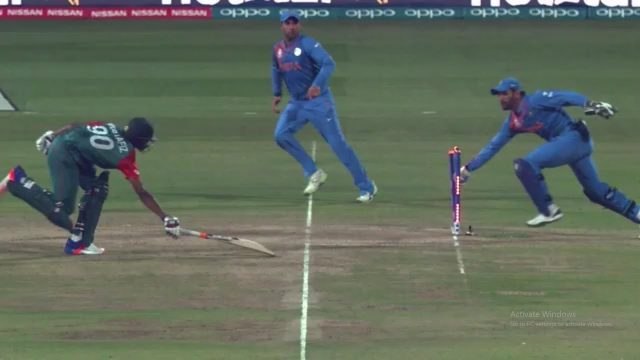 The recent nail-biting encounter at the Nidahas trophy final in 2018 is one of the most famous matches that everyone is talking about and will talk about in the future. India, under the captaincy of Rohit Sharma, had already beaten the Bangla tigers twice in the tournament. India was confident of a third victory in the final and winning the Nidahas trophy.

The men in blue won the toss and chose to bowl as they were looking to bowl the Bangla tigers out for a small total. India kept picking wickets at regular intervals as Sabbir Rahman smashed a brilliant 77 with some help from Mehidy Hasan who scored a quick-fire 19 to help Bangladesh reach past 160. They ended up scoring 166/8 as Yuzvendra Chahal picked three wickets and Jaydev Unadkat picked two.

Manish Pandey and Vijay Shankar were on the crease as they were rotating the strike well and collecting singles or doubles as the boundaries weren’t coming off. Manish then got out to Mustafizur Rahman as Dinesh Karthik walked in. The equation was down to 34 runs from two overs with a required run-rate of 17 per over.

Rubel Hossain had the ball, as Dinesh Karthik hit Hossain all over the park for 22 runs. In a surprising move by Shakib, he handed the ball to part-timer Soumya Sarkar. India needed 12 runs off six balls to win the Nidahas trophy as Sarkar ran into bowl towards Vijay Shankar.

Vijay was struggling in the middle as he sneaked a boundary in the point region. He then got out to Sarkar on the boundary line but managed to change ends with Karthik. It was all on Karthik as India required five runs from 1 delivery.

As tension mounted, Sarkar ran in to bowl the final delivery, which Karthik sliced into the stands. India won an impossible victory with the help of Karthik’s crucial contribution. He was adjudged the Man of the Match for his valuable innings of 29(8)* as India won the Nidahas trophy.