A Graspman has a pair of graspers which provides morphological adaptation, enabling it to conform to the geometry of the object being grasped. It allows the grasper to hold objects securely and manipulate it much like a human hand.

This robot, developed by the IIT Madras team, has various industrial applications such as pipe climbing and inspection, holding and assembling, all of which are possible in their design. Machines used in search and rescue operations and locomotory applications will also benefit from this robotic platform.

The research is being led by Prof Asokan Thondiyath of the Robotics Laboratory, Department of Engineering Design, IIT Madras with his student and Research Scholar, Mr Nagamanikandan Govindan.

Two such graspers, equipped with the robotic platform, provides behavioural adaptation, which is the ability to change the locomotion behaviour to adapt to the environment.

Prof Asokan Thondiyath said, “The motivation behind this research is to realize a robot with a minimalistic design that can overcome the need for task-specific robots that are capable of manipulating and navigating across different environments without increasing the system complexity.” 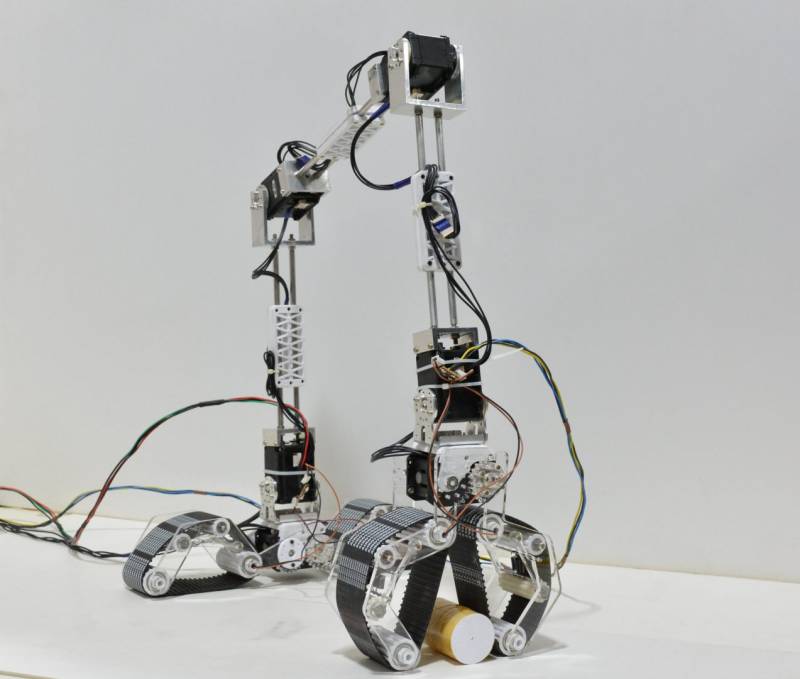 This robot aims to perform complex manipulation and locomotion tasks, without the need for dedicated motors for manipulation, locomotion and grasping.

Robotic hands must have the capabilities of human hands or be able to emulate common hand poses in order to accomplish stable grasping and dexterous in-hand manipulation of objects. The robotic grasper, the machine-equivalent of a human hand, must be able to handle a wide range of objects of varying shapes, adjust force at the points of contact with the objects, and slide/rotate an object within-hand, without great complexity of design.

Nagamanikandan Govindan said, “Our recent publication provides details of the kinematic and static analysis and experiments on the fabricated prototype to validate the different modes of operation. The combination of locomotion and manipulation gives the robot interesting features such as corbiculation (holding an object and walking), non-anthropomorphic walking and brachiation (arm swinging like Baboons).” Robots are no longer objects found in science fiction. Industrial robots are already used in manufacturing. The Daksh, IRA, Mitra, Robocop, Manav, and Kempa are robots that have been designed in India for various applications ranging from defence to entertainment. The Indian medical tourism has been driven, in part, by the robotic surgeries performed in the country. Prof. Asokan and his team also work in the design of surgical robotic trainers for Indian hospitals.

Robots have undergone various advancements in design, intelligence, and other aspects in the past decades, but further improvements in mobility, manoeuvrability, and manipulation capabilities are required to enable actions close to natural motion. Current robotic platforms, although fascinating in their scope, are limited in their tasks because of the complexity involved in enhancing versatility.