Hyderabad: Youth Affairs and Sports Ministry had claimed to support financially traditional sports like Kho-Kho, Mallakhamba, Kabaddi, Kalaripayattu, Thang-Ta, and Gatka by assisting its concerned body. However, the funds allocated for these sports contradict the Ministry’s statement.

According to the statistics released by the Ministry for 2019-2020, a meagre amount of Rs 44 lakh was released to boost Kabaddi, which is the only traditional sport featured in the list. Meanwhile, the Indian Kabaddi team had taken part in four Asian Games, winning Gold in all of them. Surprisingly Kho-Kho, Mallakhamba, Kalaripayattu, Thang-Ta, and Gatka are not even included in the list. Meanwhile, others such as Athletics, Boxing, and Shooting received a big cheque from the Ministry.

Speaking to NewsMeter, state-level Kabaddi player Mr Prabhu M noted that Rs 44 lakhs for the sport is not enough. “The amount is sufficient at the district level for players’ jerseys, shoes and matches. However, the same amount can’t be used for the sport at a national level. Participating in tournaments requires a lot of money and the allocated amount is not sufficient.”

Apart from traditional sports, school games, which are meant to boost it at the initial stages, received only Rs 33.18 lakh, which is the least in the list. School games are a platform where talents are nurtured towards becoming potential sports professionals.

K Rakesh, a physical trainer and volleyball coach at D.A.V School, noted that Rs 33 lakh is not sufficient for school-level games. Speaking to NewsMeter, he added, “A minimum of Rs 50 lakh is required. When a competition is organised, we have to take care of various factors such as accommodation, food, and travel. It also depends on what game is playing. The ground charge is about Rs 15,000 to Rs 20,000 generally and varies from sport to sport. So, 33 lakh is not sufficient for school games.”

The following table represents five highest and lowest allocations of funds for sports in 2019-2020 by the Ministry: 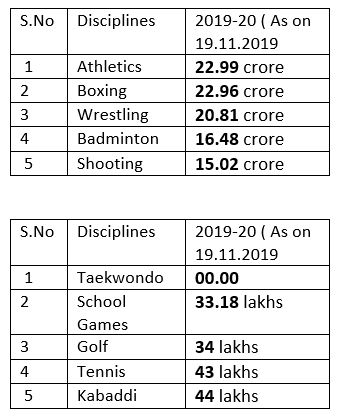