Kashmir grapples with the aftermath of scrapping Article 370

Srinagar : It is an unusually quiet day on the picturesque Dal Lake in Srinagar, the capital of Kashmir. There are no tourists and there is no business. ‘Shikaras’ or boats are all empty and parked along the edges of the lake. Nothing seems to be moving here. Life has suddenly come to a standstill. Gul Mohammad, 45 lives by the Dal Lake and has grown up watching Bollywood film shootings in the lush green Himalayan valley of Kashmir. Today, he returned to the lake with his five and six-year-old sons, not to watch any film shoot, but just to witness the wilderness of the lake and its vast emptiness. A visibly distraught Gul is worried about the future of his children. He hugs them and talks to them in a subdued tone. Gul is distressed after the Parliament scrapped Article 370, the constitutional guarantee that gave special powers to Kashmir. The article had come into force after Kashmir’s King Hari Singh acceded with India instead of Pakistan at the time of partition in 1947. As per the instrument of accession, India had rights over defence, communication and foreign affairs, while Kashmir retained rights over all other affairs of the state. 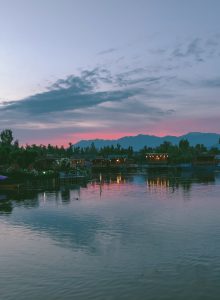 “When we woke up to curfew in the morning, we were in shock. I am worried about my young children, what will they do when they grow up,” said Gul.

But even before Article 370 was scrapped, there was panic, after a government advisory asked tourists and Hindu pilgrims to move out of Kashmir. Hours before the scrapping of Article 370, the government imposed a complete communication ban in Kashmir. Landlines, mobile phones and internet services were blocked completely. Kashmir’s leaders who believe in the electoral politics of India and have been participating in the elections, including two former chief ministers Omar Abdullah and Mehbooba Mufti were arrested. Hundreds of political workers were rounded up by the police, possibly to contain any violent backlash following the scrapping of Article 370. A ban was imposed on the assembly of more than four people. All main roads in Kashmir had barbed wires, to create restrictions in traffic and pedestrian movement. In the city centre of Lal chowk, gun trotting paramilitary troopers barred journalists from filming anything.

But despite all this, the government says that the situation is under control. Ahead of the scrapping of Article 370, security was beefed up across Kashmir. Thousands of paramilitary personnel were brought in. There was no clarity as to why was there such a massive security build up taking place. The government sent multiple messages and the confusion kept growing. Leaked government advisories that were circulating on social media, asked people to stockpile food, but the government kept denying such advisories. Once the Article 370 was scrapped, the worst fears of the people came true as the build up was for this purpose. 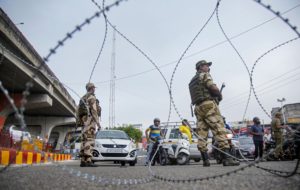 Jammu: Security personnel stand guard during restrictions, in Jammu, Monday, Aug 05, 2019. Restrictions and night curfews were imposed in several districts of Jammu and Kashmir as the Valley remained on edge with authorities stepping up security deployment. (PTI Photo)

The Kashmiri population has been caged and excommunicated. But, security agencies insist that Kashmir has shown exceptional calm following the decision. Director General of Jammu and Kashmir police, Dilbagh Singh said, “Kashmir hasn’t seen any incident of violence post the scrapping of Article 370. Kashmir is absolutely peaceful, there hasn’t been any spontaneous violent reaction, restrictions on communications will be lifted as and when the situation demands.”

The administration keeps insisting that efforts are on to ensure that the local Kashmiri population does not suffer inconvenience. Some phone lines in the deputy commissioners office in Srinagar have been activated for communication.

Deputy commissioner Srinagar Shahid Iqbal said, “From the helpline in the DC’s office about 1,200 phone calls were made in the last two days. Office numbers have been converted into helpline numbers. Ration for two months has been stocked. There is adequate fuel and LPG cylinders stock is there for 22 days. Airport buses are taking people till the tourist reception centre. Each hospital in Kashmir has been given Rs 5 lakh to purchase emergency medicine. As many as 60 chemist shops have been opened up in the capital city.”

At the Tourist Reception Centre (TRC) in Srinagar, hundreds of non-Kashmiris, mostly labour workforce are converging to catch buses to leave Kashmir. Curfew and a communication blackout in Kashmir has created insecurity among non-locals who are unsure when the situation will normalise.

Saleem and Javed from the Indian state of Uttar Pradesh are among the hundreds leaving Kashmir on a short notice. The two friends come to Kashmir every year to make mattresses and quilts. Unsure about their safety in Kashmir and living under constant curfew is unbearable for the two and they are not sure when they will return.

“We are worried and leaving. It is a big business loss for us, but at least we will be safe when we go out of Kashmir,” said Saleem. Javed adds, “We are unsure when we will return, we can only return when peace and normalcy returns to Kashmir.”

While the gathering of more than four people has been banned, some ‘Shikarawalas’ or boatmen huddle together, along the banks of the Dal Lake, analysing the situation. They are bitter about what has happened. Their anger is not over the loss of business, but over the unilateral scrapping of Article 370 by the Parliament, without consulting the Kashmiri leaders. The bigger worry though is that there is a hidden agenda behind the move, which is to change the demography of Muslim dominated Kashmir and bring in Hindu settlers from mainland India. So far only Kashmiris had the right to buy land in the region. But, after the scrapping of Article 370 people from rest of India can come and buy land in Kashmir.

Mohammad Sarfaraz, a boatman on the Dal Lake said, “They brought an end to 70 year-old issue in just a matter of 15 minutes. We fear that people from outside will come to Kashmir and buy land here leaving nothing for the locals.”

Analysts say, “While the move is directed at bringing about demographic changes in Kashmir, this has also set a new precedent to break states which don’t fall in line with New Delhi and convert them into union territories.

Kashmir-based political analyst Sidiq Wahid said, “The intent is to change the demography of the only Muslim majority state in India. It is undemocratic, completely illegal and amounts to betrayal of the people of Kashmir.”

While most of the Kashmiri politicians have been arrested, some who are out like Congress leader Salman Soz said that Kashmiri leaders must forge unity to chalk a common course for the future. “Kashmiris should stay peaceful, it is important that Kashmiris should live on to resist this betrayal, unity is the need of the hour,” he said.