Keerthy Suresh played the role of the illustrious actress Savitri in her biopic titled 'Mahanati' which was directed by Nag Ashwin. Mahanati', based on the life of actress Savitri, garnered much appreciation and love for Keerthy Suresh, as the actress put her best for the role.

Not only that Keerthy Suresh's acting prowess makes the movie more relatable, but also her looks which resembles Savitri the most is what the audience got instantly connected to. Starring Mollywood's most celebrated hero Dulquer Salman essayed the role of Gemini Ganesh in Mahanati. 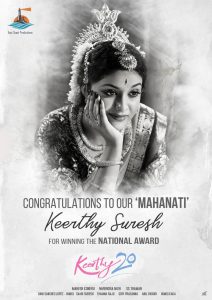 Mahanati is just more than a biopic because, it is the glorification of a legendary woman, who as an actress sets the standards high for coming generations of Indian cinema. It seems like this National Award came as a super surprise for the makers of Mahanati, as well as Keerthy Suresh. Keerthy Suresh appears jubilant at this moment, as she spoke to one of the media outlets.

"My mother had a dream of winning a national award, but could not. I wanted to fulfill her dream, as she always used to talk about her dreams", told Keerthy Suresh.

"I enjoyed living in the role of the legendary actress. But, a National Award was not something I never expected", Keerthy added. On the other hand, Best Actor award was shared by Ayushmann Khurrana (Andhadhun) and Vicky Kaushal (URI: The Surgical Strike).

Congratulations to the winners.