Nellore: Legal metrology department in Nellore district has registered a case against Reliance smart supermarket for not mentioning the net quantity of goods purchased in the bill.

According to the complainant, Reliance Outlet situated at Sri Sailam Towers Police Office, Road, Dargamitta, Nellore is selling commodities including toor dal and sugar without mentioning the net quantity in the bill which is mandatory as per the legal metrology rules.

Based on a complaint by consumer activist Srikhande Umesh, inspector of the legal metrology department visited the premises of Reliance Retail on June 5, 2020. 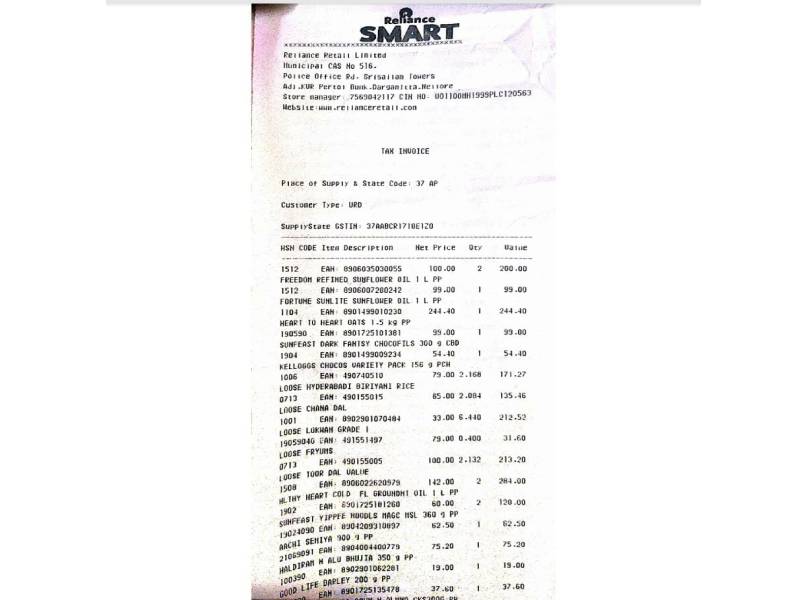 During the inspection, he registered a case for violation of Section 10 of the Legal Metrology Act, 2009 Rule 10 of the Andhra Pradesh Legal rules, 2011 for not mentioning the quantity in the prescribed format whether it’s kilogram or gram.

According to Section 10 of the Legal Metrology, any transaction, dealing or contract in respect of any goods, class of goods or undertakings shall be made by such weight, measure, or number as prescribed.  Whoever imports any non-standard weight or measure shall be punished with fine which may extend to Rs 50000 and for the second or subsequent offence, with imprisonment for a term which may extend to one year and along with fine, according to law.

Srikhande Umesh Kumar, Founder, Know Your Rights told Newsmeter that the traders must mention the net quantity of items like sugar, wheat, etc  in the bill.

“Suppose if a customer takes 469 Gms of sugar then it has to be mentioned in the bill. Not mentioning the net quantity is a violation of legal metrology rules. People should know how much net quantity they have purchased. As it is evident that the above outlet is violating the rules,” he said.

Rythu Bandhu should benefit every farmer in Telangana: KCR