Hyderabad: The Royal Aeronautical Society (RAeS) London — the oldest aeronautical society in the world — has conferred an honorary fellowship in 2019 to Dr G Satheesh Reddy. The latter is secretary, Department of Defence Research and Development, and the Chairman of DRDO. This also makes him the first Indian recipient in over 100 years. He received the fellowship during the medals and awards presentation ceremony in London, UK, on Monday.

The award has been bestowed in recognition of Reddy’s pioneering technological contributions over the past three decades. His efforts have enabled the country to realise frontline military systems and superior missile technologies.

An honorary fellowship from RAeS is considered as one of the world’s highest distinctions for aerospace achievement. It is awarded for only the most exceptional contributions in the field of aerospace, and it is equivalent to the Nobel Prize. 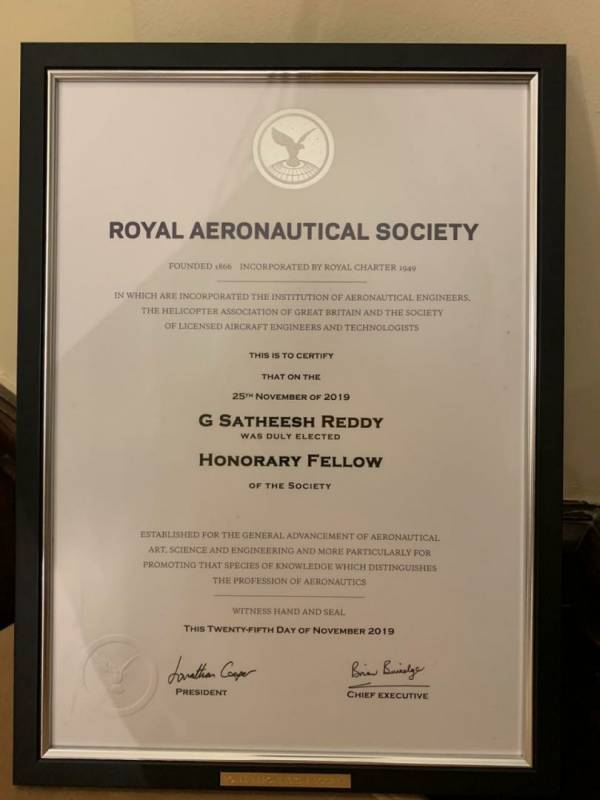 The first honorary fellowship was awarded in 1917. Eminent people across the world who have been conferred this award include Orville Wright, Dr Theodore Von Karman, Igor I Sikorsky, Dr Charles S Draper, Andrey N Tupolev, and Dr Henri Coanda.

He is also popular among students as ‘Junior Kalam’ and ‘Next generation Missile Man’ due to his knack for advanced technologies. Satheesh is one of the eminent aerospace scientists who have contributed to the formation of many national R&D policies for active development and efficient manufacturing within the country.