“The origin of the problem lies with the park that is adjacent to our colony,” said the residents of Sri Sai Nagar, most them being working professionals of the nearby Defence Research and Development Organisation in Kanchanbagh.

“In the beginning of September, during some work in that park, a drainage pipe broke down. The residents of Sri Datta Nagar got in touch with the GHMC and Hyderabad Metropolitan Water Supply and Sewerage Board (HMWSSB) and some teams visited the area. The action taken was limited to dispatching of some gulper/jetting trucks which made seven to eight errands over a couple of days. Later, the visiting team expressed their inability to do anything to mend the situation due to the huge quantum of water stagnation in the park. They promised to take up repair again once the rains subsided, but even now the problem stayed unresolved,” they said, under the condition of anonymity.

The quantum of the stagnated water increased exponentially and in a week inundated the park. This led to a wall breach and water entered Sri Sai Nagar south park inundating the same in a couple of days.

“There is a temple in the park and people visit it a lot, particularly during the Bonalu and Navaratri festivals and the drainage water entered the temple too. The water crept out of the park from the gates and started flowing onto the colony roads in full flow since then. The major colony roads have practically become an open drainage and all vacant plots, footpaths are filled with dirty sewage water,” the residents complained. 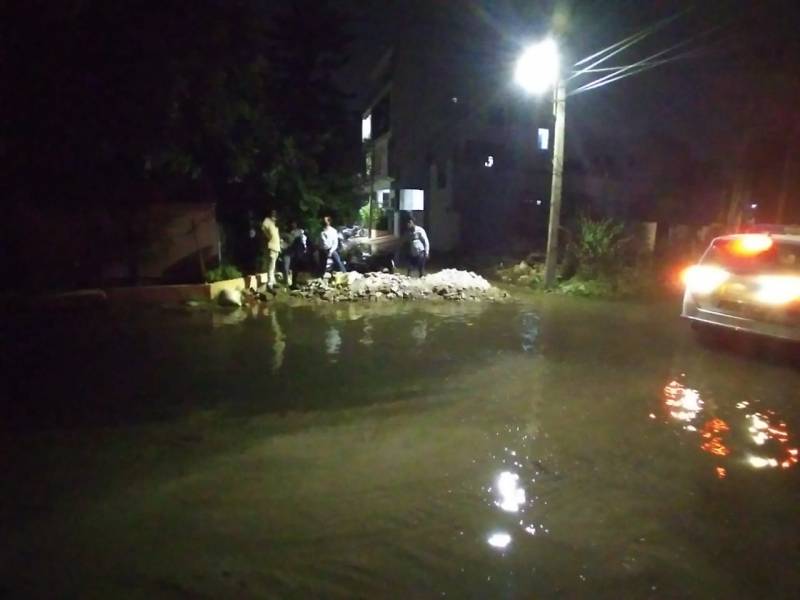 This has opened the residents to the risk of severe health and sanitation problems including breeding of mosquitoes, disease outbreak, foul odour, and creating unlivable conditions for more than 1,500 residents. Videos have surfaced where people walking or driving in these lanes are seen sliding on the road.

“The situation has become more serious in light of the COVID-19 pandemic which has complicated the situation manifold. Children and senior citizens have been left vulnerable to this issue. Even the delivery of essential commodities is being hampered and daily commuting has become a nightmare,” they added.

The residents have made multiple complaints to the GHMC and the HMWSSB which have only yielded in the cleaning of manholes and some open drainage junctions that did not provide any respite. The original problem is yet to be attended to i.e. repair or replacement of underground drainage pipes in Sri Datta Nagar park.

Along with this, the residents are also demanding the repair of the breached park wall, cleaning and disinfection of colony roads, footpaths and vacant plots, clearing of sewage remnants thorough pressure jet in all manholes, fogging and anti-vector breeding measures for the colonies.

On October 29, the resident of Sri Sai Nagar colony also called police, but even the police said they are not able to resolve anything as it doesn't come under their jurisdiction.

Speaking to Newsmeter, Hemu Naik, the assistant engineer of the GHMC, said that, “We have been attending to the problems at Sri Sai Nagar and Sri Datta Nagar for more than a month now, and we are unable to find a permanent solution. The drainage outlet which passes by the park of Sri Datta Nagar is not functioning properly and recently due to the rains, the drainage has been overflowing mainly towards Sri Sai Nagar colony.”

“The problem pertains to the HMWSSB as they are yet to clear and replace the outlet at the Sai Ganesh Nagar of the existing line, and until then the overflowing will not stop,” he added, passing the buck to HMWSSB.

When the residents approached the HMWSSB, the officials replied that the general manager of HMWSSB submitted a field report of the problem and the said area’s sewerage system is now under the control of the GHMC.

Sabitha Indra Reddy, state education minister, also visited the Tirumala Nagar Colony to take stock of the problem. Later she said that her office will interact with the GHMC zonal commissioner and instruct them to resolve the problem.

But even with the entire system from top to bottom being called to action the residents of Sri Sai Nagar and Tirumala Nagar are yet to see their roads dry and free of sewage.