Mumbai: The incumbent Ravi Shastri has been retained as the Head Coach of the Indian men’s cricket team. The decision was taken by the Cricket Advisory committee (CAC) which was formed by the Board of Control for Cricket in India (BCCI).

The new tenure for Ravi Shastri will be for the period of September 2019 till the end of the ICC World T20Is in 2021 which will be hosted by India.

Currently, the Indian cricket team is in the West Indies where they have already clinched the T20Is and One-Day series respectively. India will also play two Test matches in this tour with the first one set to start from August 22.

Apart from Shastri, who was running favourite for the top coach job and also had skipper Virat Kohli’s backing, Mike Hesson, Robin Singh, Tom Moody and Lalchand Rajput had also applied for the post.

However, according to the meeting convened by the CAC members, Ravi Shastri topped the list in order of preference while Hesson and Moody where second and third respectively on that list. 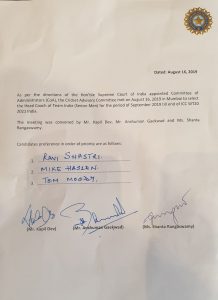 In the official press-release issued by the BCCI announcing the retaining of Ravi Shastri as the Head Coach who topped the preference list, Mike Hesson was wrongly spelled as Mike ‘Hassen.’