By Bhartendhu Sharma Published on Sep 6, 2019 at 4:04 pm
Share On:
Delhi: JNU scholar-turned-Kashmiri activist and leader of Jammu and Kashmir People’s Movement Shehla Rashid has been booked under sedition by the Special Cell of the Delhi police for her tweets on alleged human rights violation in Kashmir. 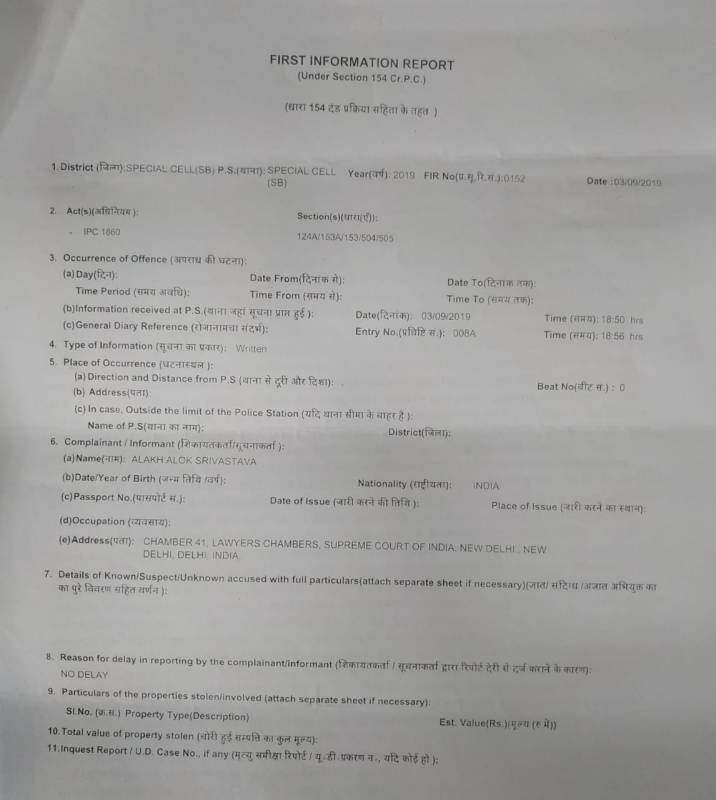 The FIR against Shehla has been registered under Sections 124A (sedition), 153A (promoting enmity between different groups on ground of religion), 153 (wantonly giving provocation with intention to cause riot), 504 (intentional insult with intent to provoke breach of peace), 505 (spreading rumours) of the Indian Penal Code.

Background of the case

Shehla, in a series of tweets, described the current situation in Kashmir. She alleged that the Armed Forces are ‘torturing’ civilians.
Rejecting Ms Shehla’s allegations on the situation in Kashmir the Indian Army called the allegations “baseless.”
Later, Supreme Court lawyer Alakh Alok Srivastava filed a criminal complaint against Ms Shehla and sought her arrest for allegedly spreading fake news against the Indian Army and the government of India.

The complaint copy states that Ms Shehla is deliberately and intentionally spreading ‘fake news’ with the intention to
*Incite violence in the country.
*Malign the image of our revered Indian Army nationally as well as internationally.
*Create unrest in the Union Territory of Jammu and Kashmir and other parts of the country.
*Promote disharmony, enmity, hatred and ill-will between different groups and also to provoke breach of peace in our country.
The complainant has further alleged that Ms Shehla intended to excite disaffection towards the government of India, which is prima facie an offence of sedition under Section 124-A IPC.
He further alleged in his complaint that that former JNU students union leader has committed offences of ‘promoting enmity between the classes’ under Sections 153, 153-A, 504 and 505 of Indian Penal Code (IPC); Information Technology Act, 2002 amongst others.

A journalist by profession who has been into reporting from four years. Bhartendu Sharma has worked across all the three mediums -- Online, Print and Television. Previously, he has worked with PageScoop media (a Delhi-based website). Later, Bhartendu moved to Deccan Chronicle, Hyderabad, where he covered many national and International sports tournament. While at DC, he also went to Singapore to cover UFC bout.

Apart from that, he has covered Lok Sabha 2019 elections in Delhi, Uttar Pradesh and West Bengal while working for Tiranga TV. He has also reported on prominent cases of crime & courts during his stint with the TV channel which featured top journalists like Karan Thapar, Barkha Dutt.

Bhartendu loves traveling and capture world in his lens. In the past, he has also made few documentaries related to human interest.

Opinion: Why I am outraged by NHRC’s advisory for women?