New Delhi: Delivering an unanimous, and historic, judgement, a five-judge Constitution Bench of the Supreme Court on Saturday effectively brought the curtains down on a century-old, and communally sensitive, issue by ruling that the disputed land at Ayodhya must be handed over to Hindus, based on evidences and findings of Archeological Survey of India (ASI).

The Honourable Supreme Court has given its verdict on the Ayodhya issue. This verdict shouldn't be seen as a win or loss for anybody.

Be it Ram Bhakti or Rahim Bhakti, it is imperative that we strengthen the spirit of Rashtra Bhakti.

May peace and harmony prevail!

The court also ordered allotment of an alternative five-acre land to Sunni Waqf Board, one of the three litigants, for construction of a mosque.

Ordering the Centre to constitute a five-member Ayodhya Trust to work out the modalities, the apex court paved the way for construction of Ram temple on the 2.77 acre land, the ownership of which has been given to the deity Ram Lalla. 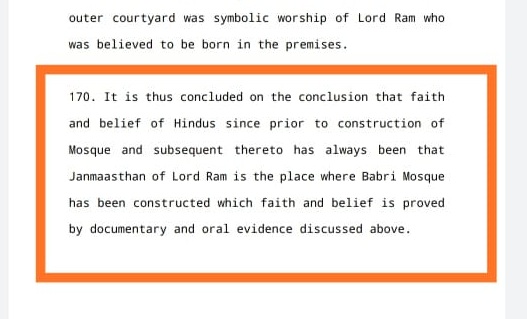 The Honourable Supreme Court has given its verdict on the Ayodhya issue. This verdict shouldn't be seen as a win or loss for anybody.

Be it Ram Bhakti or Rahim Bhakti, it is imperative that we strengthen the spirit of Rashtra Bhakti.

May peace and harmony prevail!

In their immediate reaction to the verdict, senior advocate Zafaryab Jilani, representing Sunni Central Waqf Board, expressed displeasure while contending, "We are not satisfied with the judgement. Although, we do not rule out the possibility of a review petition, we will finalise the future course of action, once we see the judgement copy. I appeal to everyone that there should be no celebration or protests."

Speaking to the media, members of All India Muslim Personal Law Board (AIMPLB), led by Mr Jilani, said that, "we will go through the judgement, some parts of which

are not to our satisfaction. Five acres of land has no value for us," the senior advocate said.

Meanwhile, the judgement has come as a major setback to Nirmohi Akhara as the Court said it is not a 'shebait' of the Ram Lalla adding that Akhara's suit was barred by limitation.

The Bench noted that the ASI report concludes that the Babri Masjid was not constructed on a vacant land. There was a structure but it was an Islamic one. However, the Bench also noted that the findings on the question of the title cannot be based only on an expert report but on settled legal principles. 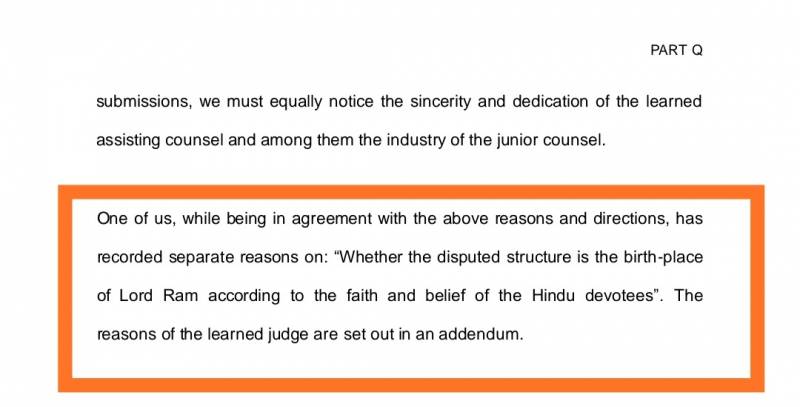 It further noted that there was clear evidence to show that Hindus worshipped in the outer courtyard of the disputed site. With regard to the inner courtyard, there was no evidence by Muslims to show their exclusive possession prior to 1857.

Also Read
Ayodhya Dispute land to be given for a temple, 5-acre plot for mosque