Hyderabad: The nine-day-long floral festival Bathukamma began in Telangana on Saturday. The festival marks the beginning of Sharath Ruthu and is widely celebrated by young girls and women. In this colourful time of the year, everyone gets together and celebrate the radiant nature with Bathukamma, an embodiment of Telangana’s vibrant cultural identity. This year, Bathukamma is being celebrated from September 28 to October 6.

During monsoons, a wide variety of wildflowers in vibrant colours are cultivated in Telangana. The most widely used flowers used in arranging Bathukamma are ‘gunuka’ (or ‘gunugu’) and ‘tangedu’. Other flowers like the ‘banti’, ‘chamanti’ and ‘nandi-vardhanam’ are also used.

Women make small Bathukammas during the nine days, dance around them every evening and immerse them in a nearby water pond. Bathukammas are colourful flowers carefully arranged in circular rows in a brass plate.

After the formation of Telangana in 2014, Chief Minister K Chandrasekhar Rao declared Bathukamma a state festival. The government distributed over one crore sarees to mark the occasion. All government offices in the state are also decked up for celebrations.

Textile and Handlooms Minister KT Rama Rao said that the programme provides continuous employment, ensuring better income, to powerloom weavers. The sarees were made in 26,000 power looms, employing hundreds of weavers. The minister added that sarees in 100 different shades and ten new patterns were being distributed this year. As part of the festivities, the state government is also distributing sarees to women from BPL (Below Poverty Line) families. The government is also giving away 1.02 crore sarees this year, spending around Rs 313 crore with each saree costing Rs 280.

Governor Tamilisai Soundararajan and KCR greeted people on Bathukamma. “I have the great pleasure to convey my warm greetings to the people of Telangana, especially the women on the auspicious occasion of Bathukamma,” said the Governor.

Bathukamma celebrations are not just limited to Telangana as they have reached a global audience this year. Telangana Jagruthi — a non-profit run by former MP and KCR’s daughter K Kavitha — is all set to celebrate Bathukamma on a global level. Apart from celebrating the festival at 300 locations in Telangana, festivities are also being organised in Mumbai and international places such as the US, UK, Europe, Australia, Qatar, Oman and some Middle Eastern countries.

“Bathukamma has been promoting values and has added spiritual significance to the daily lives of people,” Kavitha said in a statement.

Meanwhile, a book named Pula Singidi (which translates to a rainbow of flowers) — written by 316 female poets —will be released on Monday in Hyderabad, as part of the festivities. 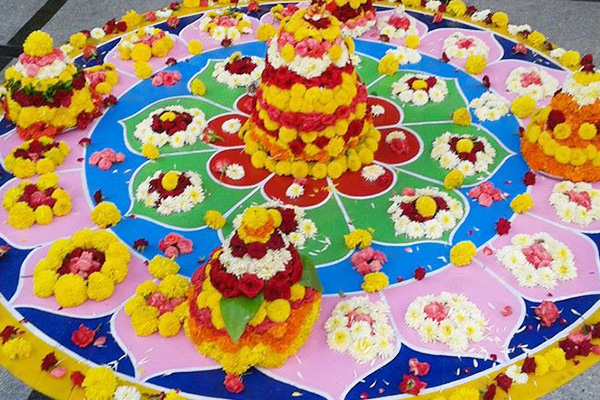