Hyderabad: India's think tank, Niti Aayog's Public Policy Specialist, Ms Urvashi Prasad, published a detailed analysis of COVID cases in Telangana, including the positivity rate, the fatality rate of cases in the state, and the number of tests being conducted by the state government. The number of total Covid positive cases in Telangana crossed the 77k mark on 7th August, and experts such as her have opined that Telangana needs to ramp up Covid testing in order to contain the virus.

Ms Prasad analysed the 5-day moving average of the growth rate of Covid cases in the state has reduced to 2.4 per cent in August, compared to 8 per cent in June.

She also said that Telangana has a much higher per day per million population test rate- 470, which is above the World Health Organisation's recommendation of 140.

What you have to say about the test positivity rate in the state? The TPR has decreased massively from June only because the government increased the testing capacity in July. Hence, the bigger the increase in testing, the lower will the TPR be eventually.

Does it matter if the majority of the tests performed are either RTPCR (Reverse transcription-polymerase chain reaction) or Rapid Antigen?

It does. Ideally, governments should have a balance between both the tests and Rapid Antigen Tests should not be conducted more than the other. RAT, however, is extremely useful for mass testing. While it does provide us with a larger number of false negatives, in the absence of a test altogether, we would not even be screening those false negatives.

Having RTPCR for every citizen is not feasible for a state.

However, RAT should not be used for those showing symptoms of the virus, because a false negative can result in several others being infected.

How would you say Telangana is performing, in comparison with other states?

Telangana has improved its rate of testing, which is very much the direction one should be taking. The number of positive cases increasing after a push in tests, is also a good sign. You can only control the pandemic if you know where the infection is.

What can be analysed from the state's fatality rate? 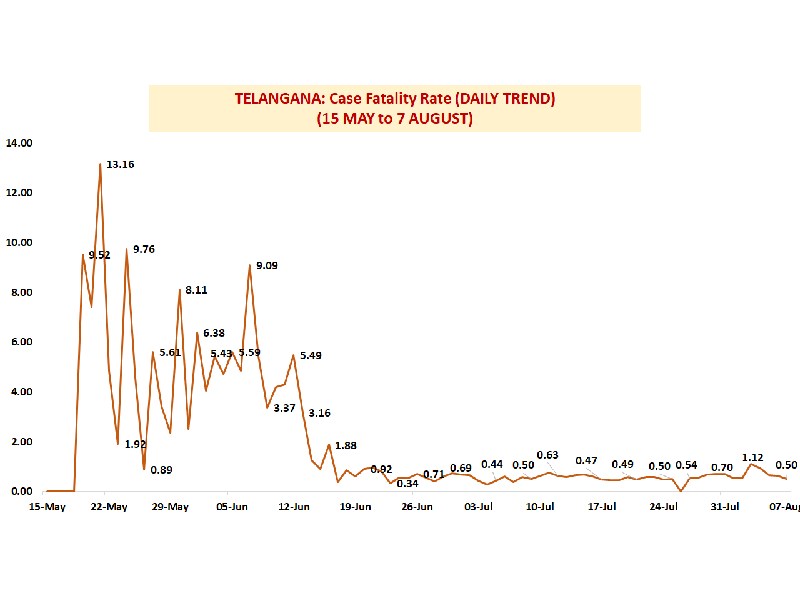 While the daily deaths have increased, and the current 7-day moving average stands at an approximate of 12 daily deaths, the state has a lower fatality rate than the national average.

The state has a fatality rate of 0.50 per cent on 7th August, and 0.8 per cent cumulatively, which is lower than the national average. Since the fatality rate is low, there is not much to worry about. The things that drive the virus is a poor testing rate and a high fatality rate. TS, however, is taking the right approach.

What can be improved in the state?

The state should gauge on lowering the test positivity rate, which can only be achieved by ramping up the tests. The Central government as adviced all states to conduct RATs and RTPCRs in balance.

Ms Prasad also commented on her published data that the highest number of cases in the state are from Hyderabad, Rangareddy, Medchal Malkajgiri, Warangal Urban, and Karimnagar districts. She further added that the government should be providing more accurate data from districts in the area. Source for the data: