Hyderabad: Telangana has emerged to be India's 5th most corrupt state, while its close neighbour Andhra Pradesh stands at 13th position, revealed 'India Corruption Survey-2019'. Rajasthan bagged the gold,the state has been categorised the most corrupt in the country, closely followed by Bihar, Jharkhand and Uttar Pradesh. Kerala is the least corrupt, while Goa and Odisha also feature in the least corrupt list, the study said.

The states have been categorised as most and least 'corrupt' based on 1.90 lakh responses received from 85,000 people.

The Property Registration and Land Issues department in both Telugu states have become the most corrupt, closely followed by Municipal Corporation, revealed the Indian Corruption Survey-2019. 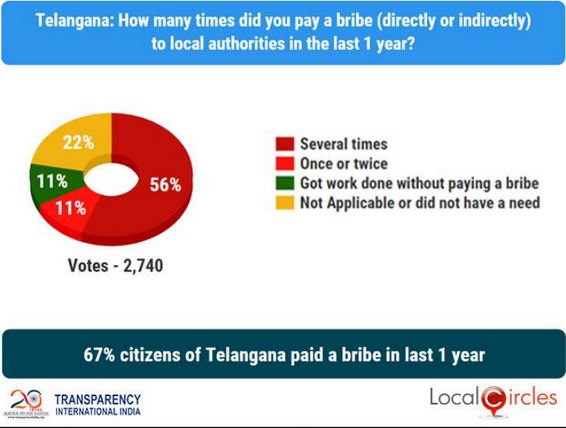 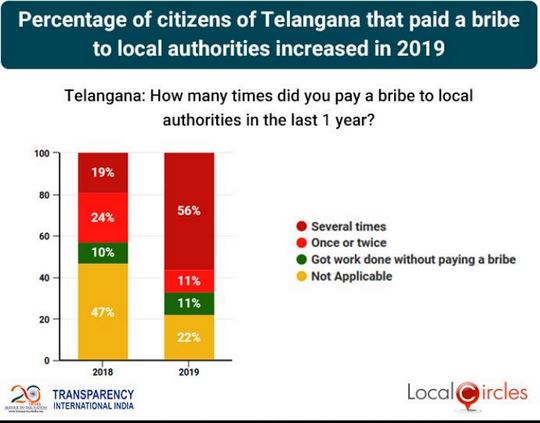 While researchers analysed 2,200 respondents in Andhra Pradesh and concluded that 50% of respondents admitted to paying bribes for official work. Out of the 50 per cent, 30% gave bribes several times (directly or indirectly), while 20% paid bribes once or twice. In contrary, 30% of respondents got work done without paying a bribe. 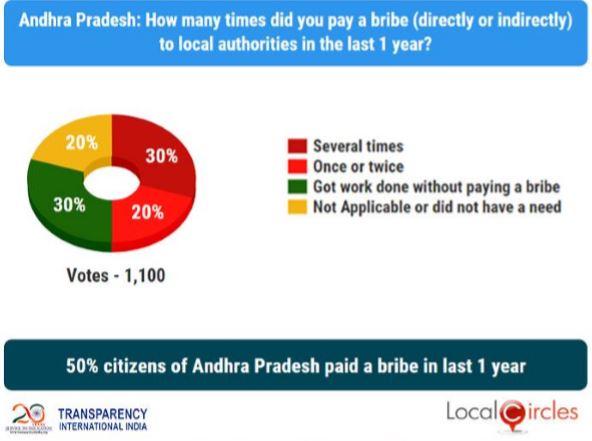 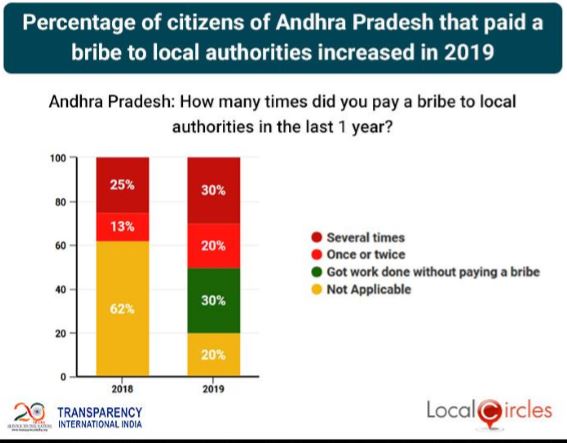 LocalCircles studied the functioning of departments like AP Police, Property Registration and Land Issues, Municipal Corporation, and others (Electricity Board, Transport Office, and Tax Office) in both the states. Out of all, Property Registration and Land Issues top corruption in TS and AP. The department is the competent authority to register properties. On the other hand, the good news is that AP’s corruption in Home (law and order) has reduced from 33% in 2018 to 7% in 2019.

In terms of the authorities to whom Telangana residents gave bribes, 40% gave it to Property Registration and Land Issues, while 33% paid it to Municipal Corporation. Around 7% paid a bribe to the police, and 20% paid bribes to others (Electricity Board, Transport Office, Tax Office, etc.)

The survey revealed that though Telangana’s Property Registration department is the most corrupt, the instances have come down year-over-year. However, the corruption cases in the Municipal Department have increased.

India’s overall ranking in the Corruption Perception Index 2018, released by Transparency International, has meanwhile improved in comparison to last year and now stands at 78 out of 180 countries. Cash, the most preferred mode

Meanwhile, cash is still the primary mode used to pay bribes, as 35% of people surveyed said they paid cash as a bribe in the last year. At the same time, 30% said they paid bribe indirectly through an agent, and 6% said they settled it in the form of gifts or other favours.