A combined Graduation Parade was held at the Airforce Academy to mark the successful culmination of training for Arti and other 126 Flying Cadets of Flying and Ground duty branches of the Indian Air Force. Arti is a 23-year-old Electronics, and Communication engineer from Ghaziabad is the first from her family to join the Air Force. She joined the Air Force Academy in June 2018. She says, "I never wanted to do a desk job. In my third year of engineering, I decided that I will be a fighter pilot."

Twenty other women flying officers also graduated with Arti this year. Shweta Choudary, who completed her training as a Transporter Flying Cadet said, "It is a happy movement for all us. Graduating as an air force officer makes us feel like we are finally mature. Very fewer women choose this profession, so I feel like it is a great achievement."

Arunabha Chakraborty hailing from Tripura was awarded the 'Sword of Honour' for standing first in overall merit in pilot's course. He says, "Since childhood, I was interested in the air force. I joined RIMC when I was in the Seventh standard. Seeing military officers in RIMC always kept me motivated to join the Air Force. Later I joined NDA College in Pune, and here when I learned to fly the Pilatus; it was a wonderful, experience." 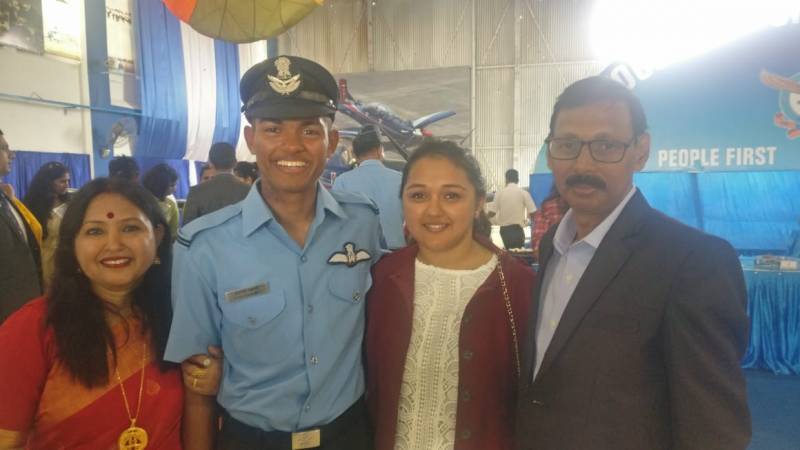 Alka Chakradorty mother of Arunabha says, "He is the first fighter pilot from our family, and we are very proud of him. He had the determination to become an Air Force Officer since childhood. He chose his path all by himself and worked hard to achieve this."

The flying cadets are the 204th batch of Flying Cadets passing out from the Dundigal Air Force Academy. The Air Chief Marshal Rakesh Kumar Singh Bhadauria congratulated all the flying cadets, who graduated. He said, "It is a matter of great pride for me to witness the combined graduation parade of the Indian Air Force."