Hyderabad: The nation saw a new controversy in the form of stand-up comedian Kunal Kamra’s viral in-flight confrontation with TV journalist, Arnab Goswami where Kunal can be seen calling Arnab a ‘coward’. He also said that he was doing it for Rohith Vemula, a PhD student from HCU, who committed suicide due to caste discrimination.

Kunal Kamra later posted the video on Twitter and wrote – “I did it for my hero… I did it for Rohit”. The video has gone viral all-over Twitter and has over 3.5 million views.

Post the video, Indigo Airlines suspended Kunal Kamra for 6 months and put him in the ‘no-fly’ list. They took to Twitter and in a series of tweets, wrote – ” @MoCA_Gol @ HardeepSPuri In light of the recent incident on board 6E 5317 from Mumbai to Lucknow, we wish to inform that we are suspending Mr. Kunal Kamra from flying with IndiGo for a period of six months, as his conduct onboard was unacceptable behaviour. ½

Hereby, we wish to advise our passengers to refrain from indulging in personal slander whilst onboard, as this can potentially compromise the safety of fellow passengers. 2/2 @ MoCA_Gol @HardeepSPuri.”

@MoCA_GoI @HardeepSPuri In light of the recent incident on board 6E 5317 from Mumbai to Lucknow, we wish to inform that we are suspending Mr. Kunal Kamra from flying with IndiGo for a period of six months, as his conduct onboard was unacceptable behaviour. 1/2

Following the suspension, other airlines such as Air India, GoAir, SpiceJet also banned him from boarding their airlines sighting inconvenience to fellow passengers.

Taking cue from the ban, many parody Twitter handles made accounts on the names of various organizations and ‘banned’ Kamra for a period of 6 months.

Everybody is having field day with #kunalkamra – Hadd hai 🤷🏼‍♂ pic.twitter.com/JXuevU7Ffh 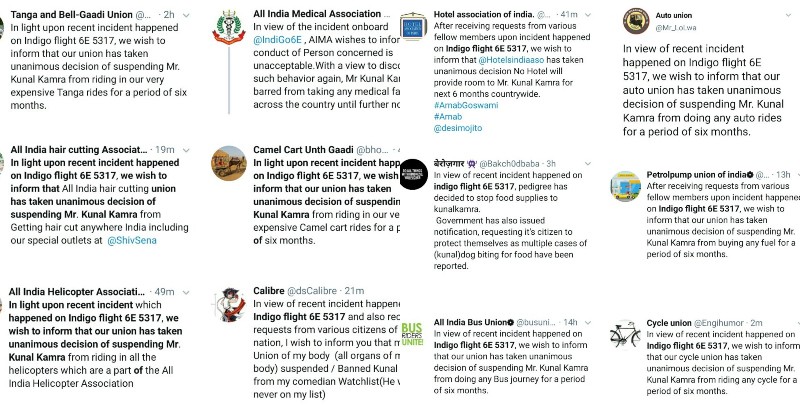 A parody account under the user name @legitpetaindia also issued a ban on Kunal Kamra and wrote – ” With reference to the incident aboard Indigo flight, we demand Mr Kunal Kamra to apologise to Mr Arnab Goswami or PETA India will request law enforcement agencies to book Mr Kamra under violation of various clauses of ‘ Prevention of Cruelty to Animals Act, 1960 “.

Ever since the controversy, Twitter users seem to have a field day trolling Kunal Kamra for his in-flight confrontation with Arnab Goswami.

Only those who will undergo 14 days quarantine allowed to enter state: AP government

Lockdown: When Cop beat up a Cop

GHMC to spray 7000 liters of Sodium Hypochlorite to sanitize city

GHMC to disinfect city thrice in the wake of coronavirus outbreak

Despite lockdown, Hyderabad’s air quality is only satisfactory

Fact Check: Was an endangered Malabar civet really spotted in the roads of Kerala?