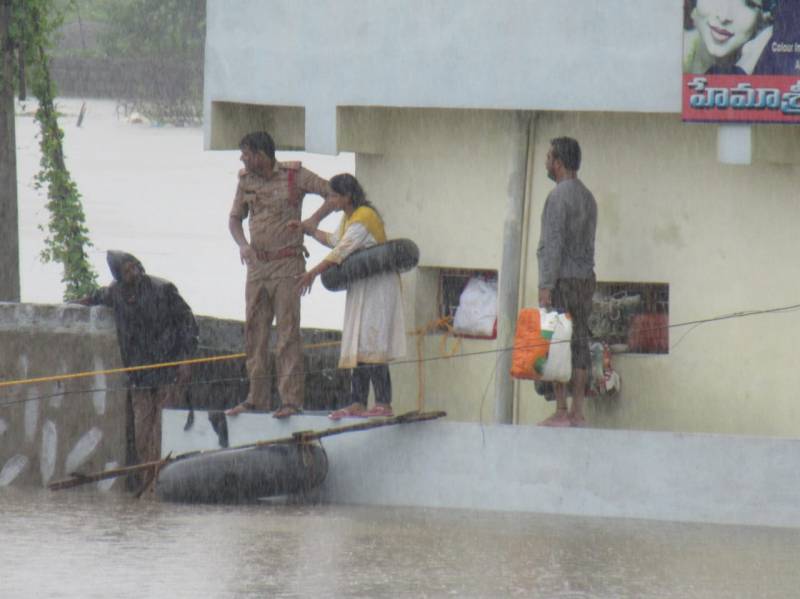 In such a situation, photographs of a police officer rescuing people in flood-affected Warangal went viral on social media. On speaking to many people in NTR Nagar and Matwada in Warangal, it was found that they were all praises for Inspector Ganesh of Matwada police station. One of the survivors, Ramulu said: “If Ganesh sir wouldn’t have come to our rescue, we wouldn’t have been able to come to a safer place. He worked for 6-7 hours continuously to save the elderly and children, shift them to nearby shelter homes set up for the flood-affected. It was the police personnel who rescued all the people stuck in floods here. The DRF team reached a day later and till then, only the police worked relentlessly.” “The rain was incessant for the last 4-5 days and we have already informed the people about the flood situation as there was water-logging in many areas. On August 15, around 3 am, we started receiving distress calls from various locations in and around Mattewada. Without wasting time, I and a team of SI's and constables swung into action and shifted the people from Mattewada. NTR Nagar is one of the worst-hit areas in Warangal and around 40 people were shifted from this area were shifted to safer places. Floodwater was flowing above 12 feet and the situation was very dangerous. We immediately made temporary boats from wood and tier tubes and shifted many people from the area. We had no time to think about Covid-19 as we were only thinking of bringing the people out of the floodwaters. The operation continued for two days till the NDRF team arrived,” T. Ganesh, Inspector of Police, SHO Matwada. Rains are still lashing many areas in Warangal and minister for municipal administration K.T Rama Rao said that a special drive to remove encroachments on drains would be conducted for a month in the city, so that flood-like situation would not repeat. He also sanctioned an aid of Rs 25 crore to restore roads and other infrastructure damaged due to the incessant rain and inundation.