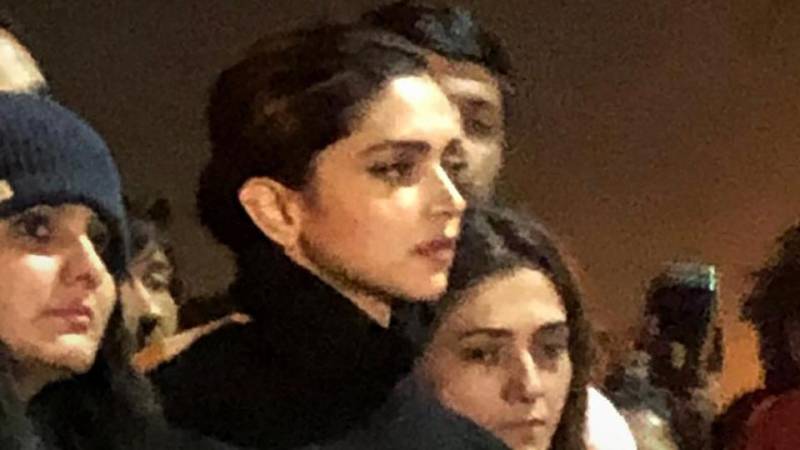 Hyderabad: Why does Deepika Padukone need appreciation for her act of standing by the side of the protesters at JNU? Not because she stood for the political Right or the political Left. But essentially, she needs to be complimented for her bold assertion of her Constitutional right to dissent and freedom of expression. Quite unfortunately, she is not condemned for her stand but she is trolled for coming out of the Glass House. Why should she be targeted for something many celebrities fear or hesitate to do? Despite a possible impact on her economic interests, she did what she could. India desperately needs even celebrities to play the role of a public intellectual irrespective of the stand they take. I would be one to appreciate even if she is with the political Right on this issue. Breaking the silence and coming out of the ivory towers is in itself a great democratic act that deserves all appreciation.

She is perhaps the highest-paid actress besides being a producer. She is certainly fully aware that her act of standing by the side of the JNU Students Union would incur the wrath of a section of society in the present polarised atmosphere. She is taking on the official narrative and those in power. Thus, it is no ordinary act when judged against the unprecedented political and ideological mobilisation on both sides of the spectra. Let me also recall the observation of no less a person like the renowned industrialist Rahul Bajaj. The outspoken industrialist of great repute said in the presence of Home Minister Amit Shah that businessmen are scared of questioning this government. The Union Home Minister was quick to reject this. But the experience of India's most celebrated actress validates the worst fears expressed by the industry.

Deepika's fate also reveals why stars like Aamir Khan, Shah Rukh Khan remain silent all these days. It would have been easy for the saffron brigade to label them as voicing the Pakistani sentiments. Thank God, they cannot call Deepika a Pakistani. Anyone who questions the government is branded an anti-national, urban Naxal, Pakistani agent and whatnot. Deepika remained unfettered by the possibility of many such ignominious titles hurled at her by the saffron parivar. In an age of social media, uncontrolled fanatic mobs are let loose on anyone and everyone who disagrees with the ruling regime. Celebrities like Deepika are certainly more vulnerable to such mobocracy. Yet, she chose to raise her voice. Kudos to her precisely for this. In this atmosphere of fear, hate, vilification and character assassination, especially when the dissenter is a woman, the charismatic actress chose to stand up to all such bullying. This is precisely the reason she received the admiration of some of India's best minds.

The trolls targeting Deepika should realise that even the highest court of India had to observe that questioning the government of the day is not an anti-national act. Being anti-government is different from anti-national. Dissent is integral to democracy. Dissenters cannot be intimidated. India is not a totalitarian country. The apex court made this abundantly clear on more than one occasion. Yet, the political mobocracy is pressed into the service of the ruling dispensation.

India is a land of argumentative traditions. Conflicting philosophical thoughts enriched the Indian civilisation. Much before the modern democratic ideas heralded on the human civilisation of the West, India saw debates, discussion and logical questioning of established thought and prescriptions. Someone who takes pride in such varied heritage should stand solidly behind Deepika for expressing herself whether or not one agrees with her. In fact, many more film personalities rallied behind the ruling narrative. Can anyone question their right to do so? The uncharitable suggestion coming from the saffron spokespersons is that she can well join the Left brigade if she so wants. But such people should realise that democracy does not mean joining a political party or subscribing to a political ideology. The Indian Constitution does not accord the fundamental right to freely express and protest only to those who subscribe to this or that or, to be precise, to those who subscribe to the Left or Right ideology. India is much more than the parochial left-right divide. Noted historian Romila Thapar says one need not be a scholar to be a public intellectual. Anyone who commands respect in society and someone who can exert influence on public opinion qualifies to be a public intellectual if he or she seeks explanations for public actions. In fact, at a time when public intellectuals are increasingly becoming an endangered species, Deepika's public defiance of the ruling narrative is certainly an act of a public intellectual. India needs many more such celebrities to come out of their glass houses to defend what they consider the rights of the people.

All this is only one part of the story. The detractors of Deepika’s actions called for a boycott of her film Chhapaak. This is preposterous for two reasons. Though the film is produced by Deepika, the careers and interests of many more artists are associated with the success or failure of the film. They have nothing to do with the stand taken by Deepika. Why should all these artists be penalised? Such act of attacking the economic interests of those who question the official narrative further validates the fears among industrialists as expressed by Bajaj. Besides, the film is around a social theme of acid attacks. If the saffron parivar does not go well with Deepika, at least they should refrain from calling for the boycott of a social theme-based film. At a time when crass commercialism is ruling the film industry, boycott of such theme-based films would only hurt the interests of the society. The film Tanhaji woven around fierce nationalism garnering four times more collections than Chhapaak on the first day of the release may reflect the prevailing preferences in society and also indicate an extent of damage due to the boycott call given by her detractors.

Celebrities or dissenters also have the fundamental rights like free speech, the right to pursue any profession without any hindrance, right to assembly, etc. Democratic Constitutions do not and cannot allow such rights to be sacrificed at the altar of State repression or vandalism by non-State actors. It is the duty of the democratic State in a civilised nation based on rule of law to control such non-State actors. But when such non-State actors brazenly operate with the tacit approval of the State, India would surely degenerate into a mobocracy and functioning anarchy. Thus, an act of defending Deepika's right to protest is a patriotic act of upholding the rule of law and Constitutionalism.

Prof.K. Nageshwar is noted political analyst and columnist. He is a former member of the Telangana Legislative Council and currently a professor at the Department of Communication &amp; Journalism, Osmania University, Hyderabad. He is the former editor of The Hans India. He was earlier the Editor-in-Chief of Telugu news channel HMTV. He was the founder chairman of 10TV. He is the author of the books Interpreting Contemporary India; How to win at life. He served on the United Andhra Pradesh Legislative Council as an independent member from 2007 to till the bifurcation of the State in 2014 representing the Graduates' constituency of Hyderabad.