Hyderabad: Andhra Pradesh chief minister YS Jagamohan Reddy on Tuesday met Prime Minister Narendra Modi at Parliament office and sought financial support for the state, while awarding special category status (SCS) to the state. YS Jagan has further requested the PM to implement all the assurances mentioned in the AP Reorganisation Act-2014 and submitted a memorandum on several issues affecting the growth of Andhra Pradesh.

The AP chief minister has asked the PM to grant special category status to Andhra Pradesh for industrial development and overall state growth. He also asked for incentives for establishment of Industries in the state. He asked for exemption in GST, Income Tax and 100 per cent insurance premium for 10 years to industries in the state.

YS Jagan was accompanied by Vijaysai Reddy other YSRCP MPs. The meeting continued for 45 minutes despite PM’s busy schedule amid ongoing discussion on scrapping Article 370 for J&K in Lok Sabha. In the memorandum, YS Jagan has narrated the actions taken by his government to curb the inequalities in developmental and preferential issues.

He said that the state government implemented many programs to increase the standard of the living of the people. Many welfare programs are being introduced to provide social security to the people. YS Jagan has requested the Prime Minister on special category status (SCS) and incentives to industries.

AP needs financial assistance from the Centre as his government's special focus is on creation of infrastructure for the industry. “Many reforms are being introduced for corruption-free and transparent Governance.

Navaratnalu being implemented with people welfare and main moto. On PPAs, the previous TDP government was irrational in signing Power Purchase Agreements (PPAs) of renewable energy which has caused huge burden on the exchequer of State. TDP government had taken up measures only to benefit select people only.

Though, there is a purchase limit of 5-10 per cent, the TDP government has purchased 23.6 per cent of renewable energy causing 2,654 crore loss to electricity department," said YS Jagan in the memorandum. Elaborating the issues, which are affecting the state economy progress, YS Jagan further told the Prime Minister that due to previous government chaotic mechanisms, a total of Rs20,000 crore debt is laid on manufacturers.

The Central government should have released Rs2,100crore over six years for seven backward district, out of which only Rs1,050 crore has been released, he said. YS Jagan has requested the PM to release Rs23,300 cr for backward districts in KBK model.On water grid, YS Jagan explained about the water problems in the state and asked to interlink Godavari and Krishna rivers. He told about the development of water grid by 2050 for supply of safe drinking water to the people in the state with Rs60,000 cr investment and asked for Central Government cooperation

He asked to fulfill the promises made to state in Bifurcation act by establishing steel plant in Kadapa district and constructing Ramayapatnam port as construction of Dugarajupatnam port is not feasible.

Earlier, YS Jagan along with his party leaders met Nripendra Misra, principal secretary to PM, at South Block office. In his 40-minute meeting with Misra, YS Jagan had explained about the financial status of AP and measures taken by his government. 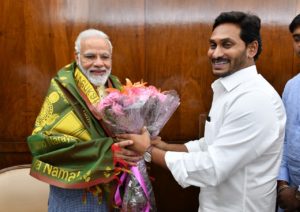 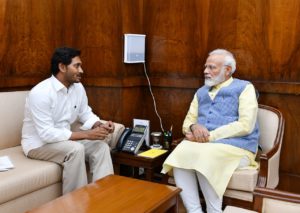 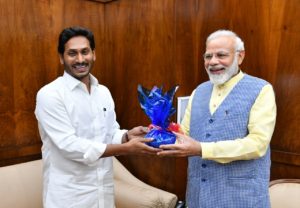 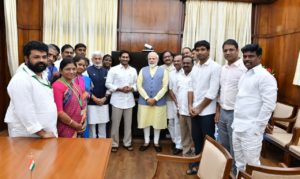 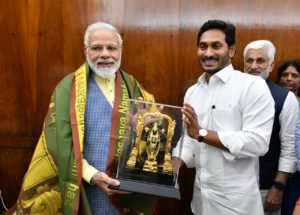