9 dead, 68 injured in accidents across Cyberabad in a week; bikers top the list

Hyderabad: Nine people have died and 74 others injured in 68 road accidents in the Cyberabad area during the last one week.

From September 14 to 20, eight fatal and 60 non-fatal accidents occurred in Cyberabad Commissionarate in which 74 people got injured.

In seven other cases, the distance was not maintained that resulted in accidents. In 4 cases, driving on the wrong (opposite) side of the road was the reason for accidents. Around 26 accidents involved motorcycles. Four people died and 35 were injured in the road accidents involving motorcycles. Two of the deceased were bikers while two others were pillion riders. Similarly, 21 of the injured were bikers and 14 were pillion riders. Shockingly, two of the persons died despite wearing the helmets. Likewise, 11 persons were injured despite wearing helmets.

A pedestrian was also killed and 22 others got injured in road accidents. One person died and 14 others injured in car accidents.

“The data clearly indicates the need for using good-quality helmets by all riders on two-wheelers. Most of the persons who died wearing helmets were either donning low-quality headgears or did not properly strap them,” said Cyberabad traffic police. 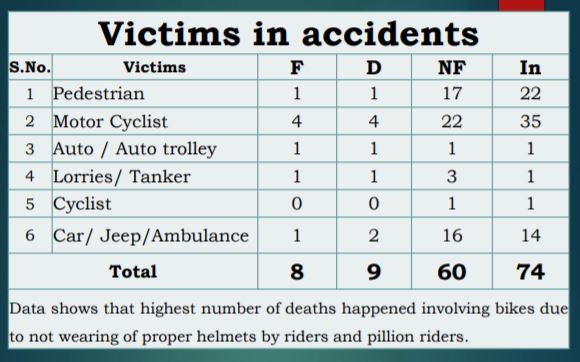 Hyderabad Road Development Corporation Limited (HRDCL) roads claimed the lives of two people. Twentysix others were injured in the mishaps. According to Cyberabad traffic police, the major reason for the collisions is the lack of rearview mirrors in the vehicle. Police said drivers have no habit of observing rearview mirrors. Changing lanes without indication and wrong side or dangerous overtaking are the other reasons for mishaps, police said.