A few twitteratis give communal colour to Vet Doc's rape and murder in Hyderabad; but is it as they claim?

Hyderabad: Disha (name changed) brutal murder has sent shock waves in Hyderabad as well as the whole country. Thousands of people, including celebrities, have taken to various social media platforms to condemn the ghastly act.

Sadly, a few have been trying to give the incident a communal colour. One among such is a tweet from Bollywood actress Payal Rohatgi.

In a tweet made on November 29, she claims, "राम राम जी #RIPdisha Hindu girl raped and murdered by rapists in Shadnagar of Hyderabad. Is Shadnagar a Muslim majority area? #IndianMedia please run this story too and get girl justice. #OmShantiOm #PayalRohatgi (sic)."

In another tweet made on the evening of the same day, she states, "Ram Ram ji. Will the liberals scream #HangTheRapist now in case of #disha gang rape and murder or will @amnesty say that men from #Minority community will be targeted if this LAW is passed #SecularismisaMentalDisorder #PayalRohatgi #HangMohammedPasha (sic)."

On the same day, Hyderabad MLA Raja Singh tweeted, "Police has released the photo of prime accused in the murder of #disha is 'MOHAMMED' Pasha. #HangMohammedPasha #JusticeFordisha. (sic)."

Others followed suit, suggesting the same.

Fact Check: Cyberabad police released a press note on the case, which reveals that four people were involved in this crime. Based on the evidence collected and confessions made, the accused were identified as

According to the report, this seems to be a pre-planned crime. The accused intentionally punctured the victim's scooter and pretended to help her. It isn't a communal affair, as is evident from the police report. 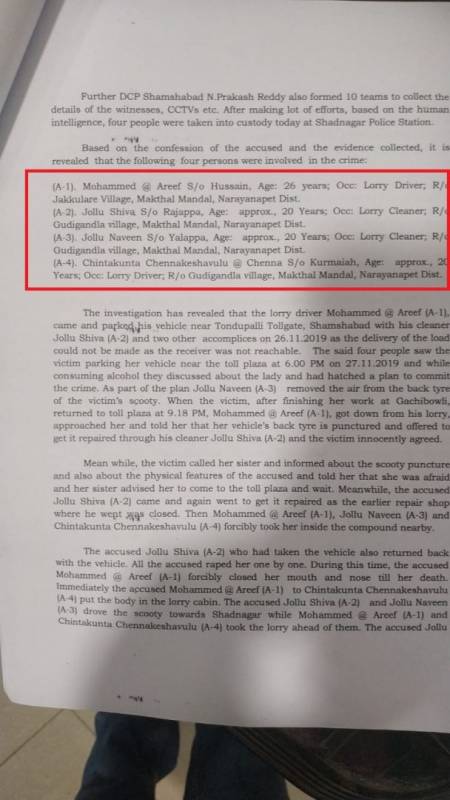 The claims made are FALSE.