New Delhi: The air quality in Delhi once again entered the 'severe' zone on Wednesday, with government pollution tracker SAFAR predicting that it would plunge into “severe-plus” or “emergency” category. The National Capital Region has been grappling with dense smog since Diwali.

According to the System of Air Quality and Weather Forecasting and Research (SAFAR), the return of heavy air pollution to the city is due to the raging stubble fires in neighbouring states combined with the wind speed and the dip in temperature.

A dip in the wind speed and temperature has made the air colder and denser which is causing pollutants to accumulate over NCR, said Kuldeep Shrivastava, head of the India Meteorological Department's regional weather forecasting centre.

Meteorologists said that the region recorded 11.7 degrees Celsius in the morning of November 12 which has been the season's lowest so far. It is believed to be two notches below normal for this time of the year.

The spike in air pollution comes on a day after the Delhi government relaxed its Odd-Even traffic rationing scheme on account of the 550th birth anniversary of Guru Nanak Dev. 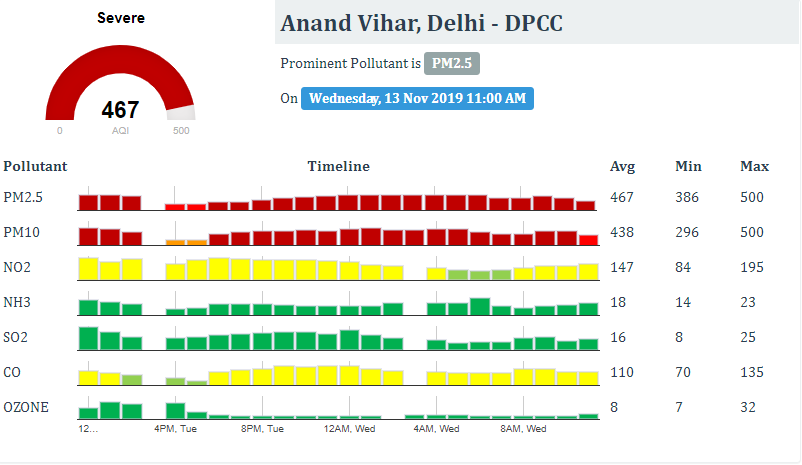 According to SAFAR, stubble burning in the neighbouring states accounted for 25% of the pollution in NCR. “No sudden recovery is expected at least for the next two days and the AQI is likely to deteriorate further towards severe-plus category by tomorrow. The condition may slightly improve by November 15,” it said in a report.