As per the mandate given by Chief Minister YS Jagan Mohan Reddy himself, the Bureau has arrested 133 government officials in 106 cases related to the trade of illicit liquor and sand as of 26 August. The Bureau has booked a total of 53 police personnel in similar cases. 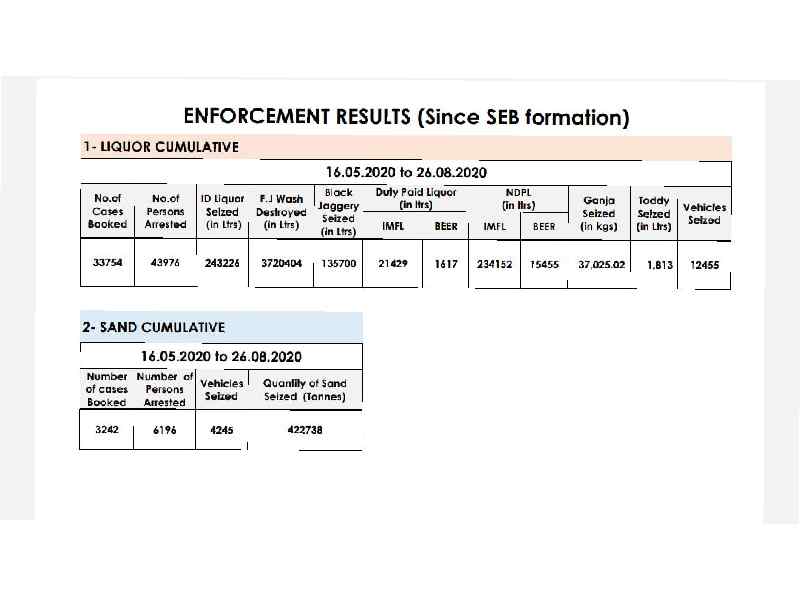 Speaking about the Bureau’s performance and addressing the issue of police personnel involved in the illegal trade, during a video conference, Commissioner Vineet Brizlal said, “Overall the Bureau has done a fabulous job of enforcing laws concerning the illegal trade of liquor and sand and the numbers reflect the same. I would like to thank our entire force for their tireless work. However, the dark side is that we had to book 53 of our own. There is a need to understand that nobody is above the law and action against the guilty will be taken at all costs.”

It is important to note that the COVID-19 menace hasn’t spared the SEB just like it hasn’t spared most of the other departments working round the clock during the pandemic. A total of 285, which amounts to almost 10 per cent of the field force of SEB, tested positive for COVID-19 out of which 27 had to be hospitalised. Despite a significant number of its personnel being off duty due to the virus, the Bureau producing the kind of numbers that it did, is worth appreciating.