Fact Check: No, Christian missionary has NOT occupied Hindu temple in Tamil Nadu

Hyderabad: For the last three days, a photo of a temple-like structure is being shared on social media. Users are claiming that the temple in Tamil Nadu is being occupied by some Christian organizations.

"In Adhiyaman, Ramanathapuram, TN Missionary stooges have occupied the most ancient Hindu Temple! Kalasam Replaced by cross Despite the vast majority of Hindus in TN," read the caption of the picture

Few of the widely shared posts on social media are... 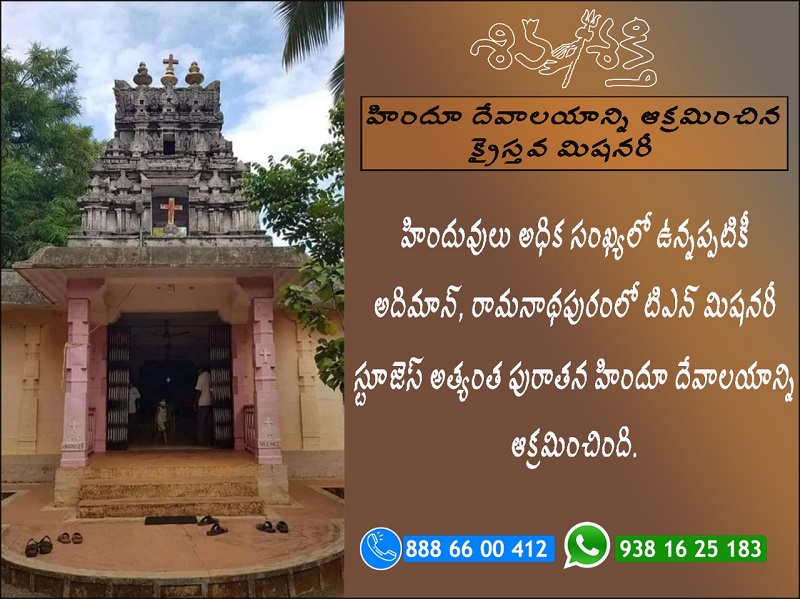 Also Read
Fact check: Telugu voted as having the second best script in world but not recently

By observing the image, we could see that the cross is sculptured on the pillars. The girl inside is seen wearing a mask which suggests that the picture has been was taken recently. But, the reverse image search didn't yield any promising results. So, we ran a search with keywords: "In Adhiyaman, Ramanathapuram, TN Missionary stooges have occupied the most ancient Hindu Temple'. We received a Reddit page, in which a user said that the temple-like church is an ashram run by National Missionary Society of India (NMSI) at Courtallam in Tenkasi district of Tamil Nadu.

The Facebook user 'Suresh & Gracy Ministry Updates' shared their pictures during the tour to the ashram in Courtallam in 2013. Upon probing whether any Christian organization has occupied the temple, we found another temple tower-like structure with a cross on it from the Facebook page of NMSI

The post says that it is Christukula Asham at Tirupattur. By the document at http://voiceofdharma.org/books/ca/ch05.htm and Chapter 8: The Eternal Christ in the Ashram Movement from the book, Jesus as Guru available at https://petervas.files.wordpress.com/2013/03/jesus_as_guru1.pdf, we found that the Christukula Ashram at Tirupattur is established in 1921.

The Christukula Ashram movement was started by two doctors, Dr. S Jesudason and Dr, Ernest Forrestor Paton in 1920. It is believed that it inspired an Indian Christian Missionary Sadhu Sunder Singh, who preached Christianity by allowing local traditions and saffron clothes. The movement is believed to have been supported by Mahatma Gandhi.

Since then, the NMIS constructed few ashrams in Tamil Nadu temple architecture replacing the Hindu symbols and idols with Christians. The ashram and hospital at Courtallam are part of them. We are sharing the other temple like churches we came across while working on this claim... Hence, the claim that the Christian missionaries are occupying the temples to run churches is FALSE. The structure is in Courtallam and not in Adhiyaman, Ramanathapuram.