By Anusha Puppala Published on Aug 23, 2019 at 8:02 pm
Share On:
Tirupati : Advertisement about Haj and pilgrimage to Jerusalem on the Andhra Pradesh Road Transport (APSRTC) bus tickets issued in the temple town of Tirupati has triggered a major row in the state. Hindu groups and the opposition allege religious conversions. The BJP unit of AP alleged that the AP government is trying to pitch other religions against the Hindu religion.
Andhra Pradesh BJP leader Lanka Dinakar told Newsmeter, “Tirumala Tirupati Devasthanam is the pride of Hindus and Lord Venkateshwara devotees. The AP government is propagating other religions at the cost of the exchequer. How is the advertisement of Haj or Jerusalem pilgrimage justifiable?. 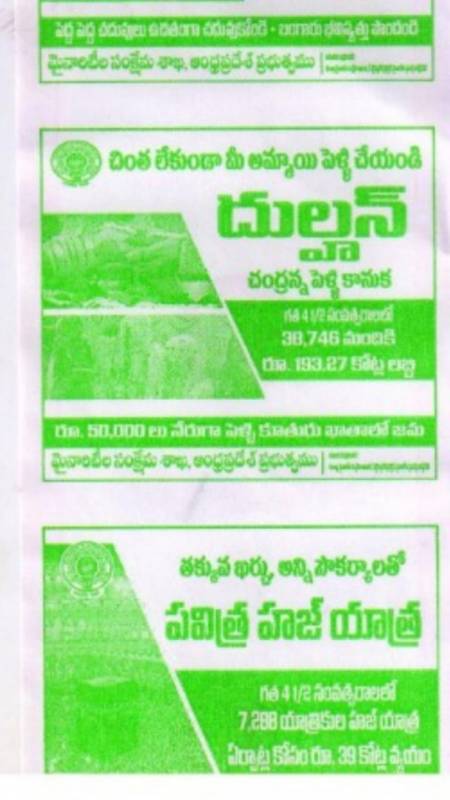 He added, “We strongly condemn it. In the last few months, we have seen incidents against Hindu traditions and practices. We are not against any religious practices individually, but our demand is that the preciousness of the Hindu religion be upheld.”
In a tweet to the AP Chief Minister Y. S. Jagan Mohan Reddy, Andhra Pradesh BJP president Kanna Lakshmi Narayana tweeted, “Death of 100 cows, allocation of shops to people of other religion at a Hindu worship place, Srisailam and now, promoting a trip to Jerusalem for Christian on the bus route to Tirupati is an insult to people of Andhra & Lord Balaji. Such malafide acts happening knowingly? @jagan @VSReddy_MP (sic).”
Denying the allegations, endowments minister Vellampalli Srinivas said, “We have ordered an investigation into the issue as soon as it was brought to the government’s notice. During the investigation, we found that the tickets were printed during the TD regime before the elections. The opposition is trying to imply everything to the government and trying to malign the name of the CM. We will take strict action against the media houses and individuals who are trying to spread hatred among the people of the state.”
BJP MLA from Telangana Raja Singh said, “We have heard that the Andhra government has always been a secular government but then why is the govt printing Jerusalem ads on Tirupati bus tickets. I question the CM whether he knows about this incident or not and take action against whoever printed these ads. Tirupati Devasthanam is a Hindu temple and no propaganda or advertisements should be done about any religion in a Hindu temple.”
The issue about the ads was highlighted by passengers who bought the RTC tickets. Passengers said that the ‘Hajj- Jerusalem’ tour ads were issued at the Ram Bagicha depot in Tirumala and read, ‘visit Jerusalem with all facilities in a less Budget’ and ‘visit Hajj in a lesser Budget.’
Also Read: https://newsmeter.in/telangana-christian-jac-protests-burns-effigy-of-elvis-stephenson/