Hyderabad: The brutal killing of a pregnant elephant in Kerala's Silent Valley Forest in Palakkad district by feeding her a cracker-filled pineapple has created widespread anger across the country. However, there were also attempts to add communal color to the incident.

Some people are trying to fan hate by trying to link it with Muslims claimimg that the incident took place in Malappuram, which is a Muslim majority district in Kerala.

The latest claim being made is that two Muslim men have been arrested for killing the elephant. The claim was made by Amar Prasad Reddy, Media Advisor to Union Minister of State for Health and Family Welfare.

"Amzath Ali and Thamim Shaikh were arrested for the elephant killing case in Kerala. I demand the @CMOKerala to do the transparent investigation without any mercy based on religion, caste, or creed. On June 3, an FIR was lodged against unidentified people under relevant sections of the Wildlife Protection Act. Two people have been taken into custody. People who are asking source should demand @CMOKerala to reveal the FIR Copy," Reddy tweeted. However, the tweet was later deleted. At the time of deleting, the post had more than 1K retweets and 1.5K likes. 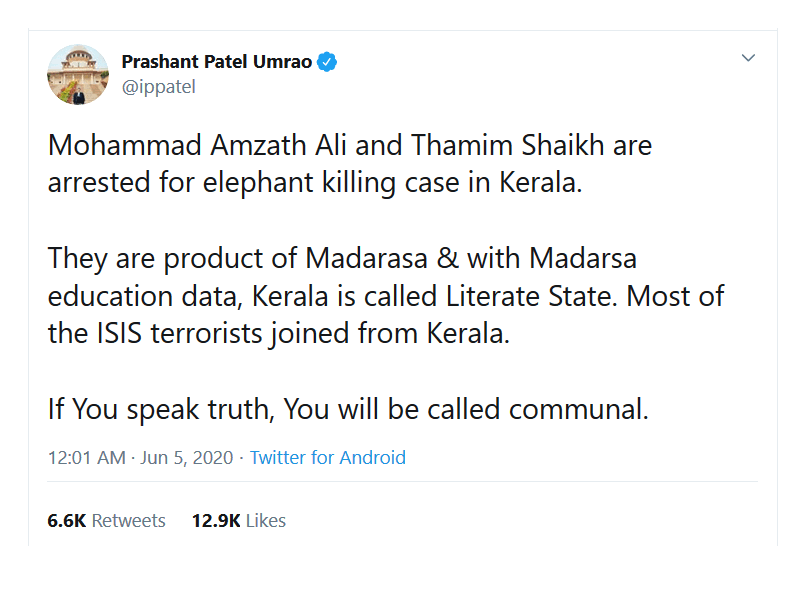 The archived version of his tweet can be seen here.

However, the claim is False.

According to the official reports from Kerala, an FIR has been registered against unidentified people under relevant sections of the wildlife protection act over the incident. A local farmer named Wilson has been reportedly arrested for his alleged role in the incident, the state forest department said on Friday, 5th June. According to the latest New Indian Express report efforts are still underway to nab the other persons.

Reacting to the tragic death of the pregnant elephant, Kerala Chief Minister Pinarayi Vijayan in a tweet on Thursday asserted that everything will be done to bring "culprits to justice".

"An investigation is underway, focusing on three suspects. Police and forest departments will jointly investigate the incident. The district police chief and the district forest officer visited the site today. We will do everything possible to bring culprits to justice," CM Vijayan tweeted.

However, the CM also condemned the hate campaign against certain communities in the state under the garb of the elephant's death.

"We are saddened by the fact that some have used this tragedy to unleash a hate campaign. Lies built upon inaccurate descriptions and half-truths were employed to obliterate the truth. Some even tried to import bigotry into the narrative. Wrong priorities," he said.

Hence the claim that two Muslim men from Kerala have been arrested for the brutal killing of a pregnant elephant is FALSE.