During the last few days, a video showing hundreds of black birds swarming in the sky and occupying the parking lot of a mart was being shared widely on social media. The video was being shared with the description, "Crows not allowing customers to come out of super market in Saudi . Yesterday, it was swarm of locusts in Jaipur and now, it is crows in Saudi Arabia. Not able to understand what is happening. Is it the beginning of the end of the world ??" When the people across the globe are facing the threat of Coronavirus and the people in India are worrying about locusts and the damage they could do to crops, a number of people expressed concern over hundreds of black birds occupying cars in parking lot, and worrying if it also a sign of apocalypse.

Also Read
Fact Check: No, Delhi man was not killed due to hand sanitiser blast

The claim that the crows were not allowing customers to come out of the supermarket in Saudi Arabia is FALSE.

The reverse image search of Google and Yandex with a screen grab of the video and time set to before March 31, 2020, provided results that claim the video is on internet at least from 2017. But, the links didn't open the videos.

After repetitive search with other screenshots of the video, the link for the video posted at ifunny.co by a user mattjc17 on March 27, 2020 surfaced. However, one of the video by ViralHog posted on April 17, 2020 on YouTube at https://www.youtube.com/watch?v=h7Ti-O8MByY claimed that the video is recorded on December 6, 2016 at Carrollton, Texas, USA. The ViralHog is a website which buys and sells videos that could go viral. Hence the claim of the video sharing people that the incident took place in very recent times is FALSE. 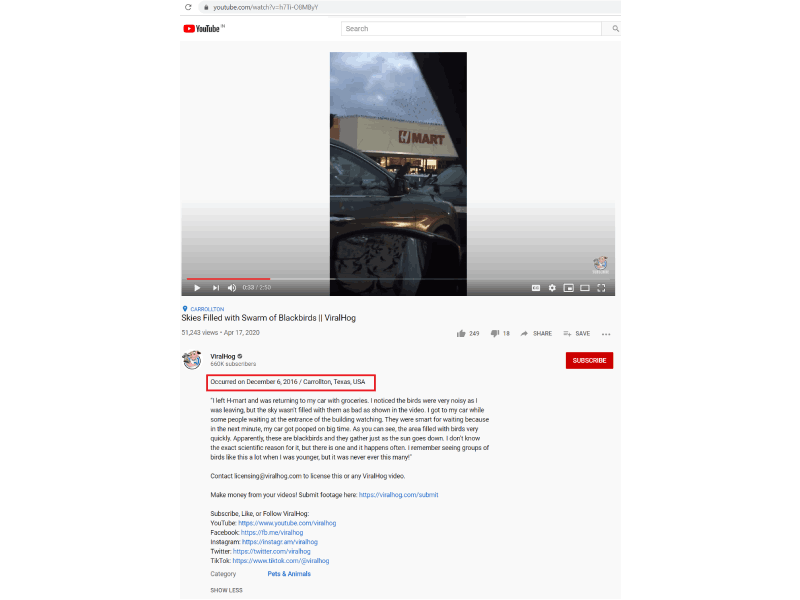 Trivia: When the reverse image search was used, a number of videos and links about thousands of black birds taking over Texas and other places were found. These black birds are locally called as grackles, boat-tailed grackles or long-tailed grackles. These are smaller than crows in size and have bright yellow eyes to easily differentiate.

The swarming of these little blackbirds is not a rare or peculiar incident to worry and a common sighting in Texas and other states of the USA for over a century. The National Geographic explains that "the species has experienced a great range and population increase in the United States, showing a 3.7 per cent annual increase from 1966 to 1998."

To make sure that the place is not Saudi Arabia, the street view feature in the Google Maps was utilized and the storefront, parking lot, and other details have perfectly matched at this location. Hence, the claim that the blackbirds swarming in the sky and not allowing customers at a shopping mall in Saudi is FALSE.

The video shared by the ViralHog has the spot audio, which can be believed to be true audio. But the video being virally shared on social media was edited and the audio of some other video was used on it. This is the regular practice that people with intentions to disturb the peace in the society and make fun of everyone sharing them in anxiety.

Following this information, the claim that crows were not allowing the customers to come out of supermarket in Saudi is VERIFIED TO BE FALSE.