Amid this, a video of Amitabh Bachchan praising Nanavati Hospital COVID warriors is going viral on social media. Social media users claim that the video is recent.

"Amit Ji's video in which he thanked Nanavati Hospital staff some time back! A friend sent just now! Everyone it seems is up in Mumbai and wishing Bachchan Sir a speedy recovery! (sic)," said a Twitter user, who posted the video.

News channel Aaj Tak also shared the video claiming that it is recent. "Amitabh Bachchan releases video from Nanavati Hospital, Thanked all the doctors and staff," reads the caption.

Not only Aaj Tak, many other media channels too shared the video. 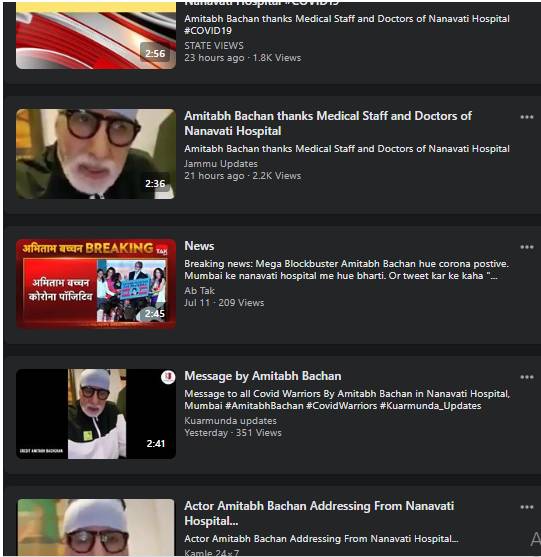 By doing a reverse image search we found that the video is not recent. It was posted on April 23 by Bombay Talkies TV on its YouTube channel. "Watch Bombay Talkies TV. Amitabh Bachchan salutes doctors. Megastar Aazaad | Nanavati Hospital," reads the caption

Nanavati in a statement also confirmed that the video was shot in April 2020, to acknowledge the efforts of doctors.

According to the statement, Bachchan had donated some PPE kits and sent a video message to encourage the COVID warriors of Nanavati Hospital.

Hence the claim that the video is recent is false. The video was released in April to encourage the COVID warriors of Nanavati hospital.

The condition of the Bachchan family is stated to be stable. Bachchan's house was disinfected by the municipal officials today.