India-China Standoff : Favoured Options to deal with the Dragon

There were three recent developments in the Indo-China Standoff – (a) the Indian Army has occupied six new heights of the Magar hill, Gurung Hill, Recehen La, Rezang La, Mokhpari and between August 29 and the second week of September besides the dominating height over Chinese positions near Finger 4 (b) Moscow Agreement with China seeking to replace the term LAC with the looser expression “border areas” while all the boundary-related bilateral accords and protocols hitherto are LAC.

The foreign ministers agreed in Moscow on a 5-point consensus -“dialogue, quickly disengage, maintain proper distance and ease tensions” as points “agreed” upon and “that the current situation in the border areas is not in the interest of either side.” With several friction points and little headway during the summer, there was seemingly one choice as the harsh winter sets in – the commitment to not aggravate the situation by pausing on sending more troops (c) the first simultaneous military-diplomatic and the sixth round of Corps Commander-level talks meeting between two sides on Sep 23, the first since August 02, with a decision taken "to stop sending more troops to the frontline, and strengthen communication on the ground, avoid mis-understandings and misjudgements. The recent military level talks reflected a more assertive Indian policy.

The positive in all this is that engagement at any level has not broken down. With elongation of standoff now a certainty, border skirmishes off and on could be expected. The Army ought to have realised by now that the Chinese are here to stay and, like the Line of Control (LoC-along Indo-Pak border in J&K), the Line of

Actual Control (LAC) will need to be patrolled through the year as well.

Unprecedented deployment of troops in eastern Ladakh could be the new normal with India's top priority now being to secure the border as against the hitherto border management policy. Indian Forces have faced the Chinese PLA head-on without undermining its strength. The Indian Armed Forces displayed resolution in defence by recognising that they are confronting a powerful adversary which they once thought could be befriended. Securing border in Winter on the icy cliffs of Ladakh : With resolution not expected anytime soon, around 50,000 troops each from both armies will spend a brutal winter in eastern Ladakh. The Pangong Tso lake is at 14,500 feet with salty water and no marine life.

the early part of the evening, the temperature would go to about minus 25.

The biggest problem is the wind. The wind chill factor is phenomenal.The area is like a barren desert. Patrols are out in the open with no trees or bushes to take cover.Soldiers serving in Ladakh have to battle the severe weather and the enemy at heights of around 16,000 feet with attendant risks of hypoxia due to lack of oxygen,acute mountain sickness, high altitude pulmonary edema when water fills up in the

lungs or cerebral edema when water fills up inside the brain.

hospital in Leh at 10,500 feet. Helicopter visibility becomes impossible during heavy snowfall or blizzard where you can see beyond three feet. One can imagine what it takes for soldiers to serve in one of the world's harshest, highest and toughest battle terrain.

In sub zero temperatures and bone-chilling winds at such extreme heights make survival difficult and maintaining the logistic supply to these points is a nightmare. Patrolling the rocky ridges is tough during winter because they go along the lake to the Finger areas. One cannot climb the ridgelines, but can only walk

up along the slopes. There are rocks and cliffs.

Also Read
Himalayan Splendor: Are we Prepared for long haul?

The mountains have very narrow tracks cut into the slopes that go on for miles. There are tracks where only one or

two people can actually walk, so patrols move slowly. Movement is laboriously slow and superiority ratio for attacking troops will need to be extremely high due to lack of cover, lower effect of artillery, and near absence of utilisation of air power in such operations. The defender rules the battlefield, but the surprise factor 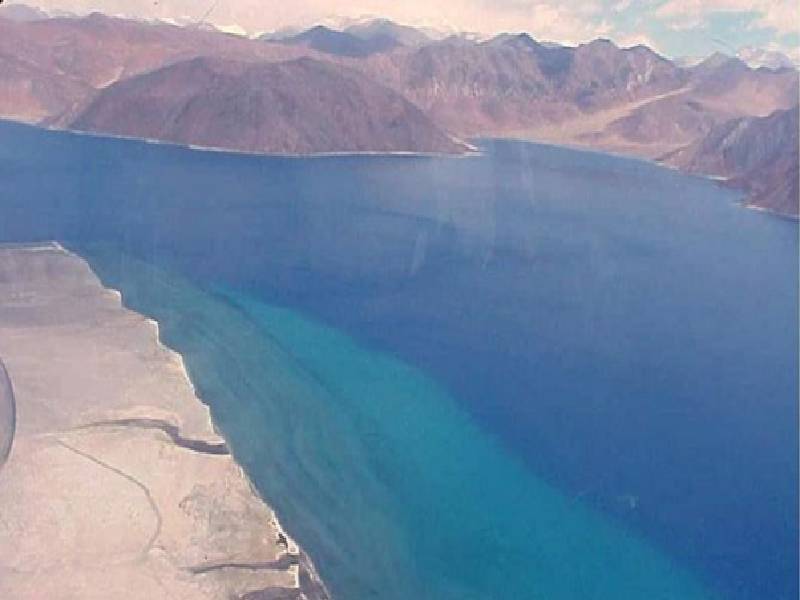 Along the Line of Control (LOC)between India and Pakistan, the BSF comes under the operational command of Army. This is not the case with ITBP along the LAC. A police controlled 90000 strong ITBP organisation was created to guard 3488 Km long Indo-China border as First Line of Defence.

If Chinese troops have crossed the LAC in various areas during April-May, which would not have been possible

without proper acclimatisation for about 2-3 months, there is obviously some gaffe somewhere leading to our failure to detect their preparations, movements over a stretch of 18 kms inside at Y junction in Depsang plains and about 8 kms inside to Finger 4 in Galwan Valley and Pangong Tso.

This failure is akin to what had happened in Kargil. The Kargil Committee was set up to go into this aspect

intelligence failure among others. The current set-up in which ITBP and BSF report to Home Ministry and Army to Defence Ministry is certainly not an ideal for both reasons of accountability and operational control.

command issues Presently only IPS officers are sent on deputation to ITBP and not Army officers. This aspect needs urgent attention to ensure single Command and Control structure of all forces deployed to safeguard the borders.

There is also a need to not use BSF, ITBP and other para military forces on internal security duties which could be left to CRPF alone.

Summit meetings with China : Successive governments have put more faith in diplomacy than the armed forces in achieving security objectives. Despite 1962 war India continued to work towards peace on the existing borders despite its legitimate claims to Aksai Chin and other areas illegally ceded territories by Pak to China.

Five separate border-management agreements were signed at summits between 1993 and 2013, with each accord hailed in India (but not China) as a major or historic “breakthrough”, all these during the Congress regime. Overselling outcomes of summit meetings with China from 1988 to 2019 for leadership glorification has led

to India’s worst China crisis after the 1962 war. The diplomatic blunders of 1948 (Kashmir dispute’s internationalisation), 1960 (Indus Waters Treaty), 1966 (Taskhent) and 1972 (Simla), besides 1954 (Panchsheel Agreement’s acceptance of the “Tibet region of China”), have over the years imposed heavy and enduring costs Favoured options for India - Economic and political approach : India must continue to counter China moves on economic and political fronts, without letting its guard down. My earlier article advocated steps to significantly hurt the Chinese economy by banning more of their digital apps; imposing restrictions on Chinese companies from executing government contracts, invoking close scrutiny of Chinese imports and completely removing Chinese products from the telecommunication sector.

In the short and medium terms Indian supply chains in electronics, telecommunication, automobile and pharmaceutical sector would be disrupted, but in the long run, it may make India self-reliant in these sectors and

boost domestic manufacturing. However, these alone may not be enough to coax the Chinese to abide by existing treaties, agreements and protocols.

On the political front, India is becoming more pragmatic in aligning itself with other nations. The engagement among the ”Quadrilateral”(QUAD grouping -comprising Australia, India, Japan and the US) has been revitalised. It is expected to meet in end September.

The Quad could be expanded to include Britain and France to bring greater depth. The inclusion of Taiwan as an observer to the upcoming Quad Foreign Minister meeting or a higher profile meeting for the autumn has already been proposed by US President Donald Trump.

Early action to develop alternate global supply chains to exert more economic pressures on China are needed as was endorsed in the recent meeting of trade ministers of Japan, Australia and India. From a strategic perspective, making the Andaman and of Quad member countries and France, raising India's naval presence in the Indian Ocean Region and South China Sea are necessary Nicobar islands a hub for intelligence and logistics sharing for the operational use.

This kind of action has the potential to deal a telling blow to the Chinese economy, close to the US

presidential elections and could well turn out to be a game-changer for the waning support for President Trump! There is an element of risk however.

Should Joe Biden be elected in November and he (sensibly) normalises relations with China, India should not be left stranded with no doors open with Beijing for an approach. It is not without significance that clearly some issues that have a bearing on the party that is going to get into power in US are resonating within the Indo-American

community and one of them is Trump’s hands-off attitude on Kashmir and theDemocrats’ vocal criticism of Modi’s Kashmir policies, especially their focus on human rights issues.

Review of India's policy on Tibet, Xinjiang and Hong Kong is also required urgently. The gradual upgradation and strengthening of India-Taiwan relations is required. Diplomatic confabs must continue bilaterally, as well as on international forums like the BRICS and RIC trilateral.

The time is ripe to extend the confrontation with the Chinese to the maritime domain. India has an opportunity to engage with a world that is increasingly uncomfortable with China’s actions, notwithstanding that

On the military front, recent events have shown that China has failed to subdue Indian troops at LAC. This is a clear indicator that India has taken a completely different stand when it comes to the Chinese. In the past three decades, the PLA continued to nibble into the LAC and the Indian troops maintained a defensive position and stuck to patrolling points only as was defined by the China Study Group.

This time the mindset has changed drastically and the Indian troops are not willing to stick to patrolling points which fall short of the Indian perception. Since the aggression by the PLA in May, India has matched in terms of

deployment of its military assets as it is unwilling to cede any more land. Imposing substantive economic and diplomatic costs, coupled with the application of coercive military pressure, holds the key in dealing with errant

Post winter : According to sources the Army has made elaborate arrangements to maintain the current level of troops and weapons in all forward areas in eastern Ladakh and other sensitive high-altitude sectors in the harsh winter months. The next few weeks after the winter will show whether de-escalation will start or jostling for tactical gains and capture of vantage points, in a barren terrain littered with ridges, continue. If the latter, the possibility lingers of

armed local action spiralling into the use of heavy arms or even air power. The chain of events in international arena in the coming winter months will influence the resolution of this face off. Apparently both sides will try to strengthen to meet any contingency.

Tail Piece: Diplomacy is unlikely to deliver the status quo ante India seeks. In fact, China seems intent on continuing, below the threshold of armed conflict, coercive military pressure along the entire frontier until India reconciles to the new status quo. In the least, it promises to shake up India’s business-as-usual approach to national security. Undoubtedly, the incident at Galwan valley on June 15 and China’s intransigence has flared up public opinion and nationalistic sentiments.

Let us not politicise the army bravery. Let us feel proud of our defence forces if we feel proud to be an Indian. This is the only place in the whole world where you will find all religions and castes working together to protect our motherland. Let not anyone question actions of defence forces by getting influenced by any political leader or party. India has sufficient military might to give a fitting reply.

India’s resolve and its capacity to fight when national honour and sovereignty are at stake are factors to reckon with.

Also Read
Ladakh standoff: Dragon and Elephant appear to be heading towards a limited conflict