“I DON'T TRUST THE CHINESE ONE BIT. THEY ARE AN ARROGANT, UNTRUSTWORTHY, DEVIOUS & HEGEMONISTIC LOT. YOUR WATCHWORD SHOULD BE ETERNAL VIGILANCE".

John K Fairbank, a noted American Sinologist on whose name 'The Fairbank Center for Chinese Studies at Harvard University' is named, ascribed Chinese behavior to what he called 'SINO - CENTRISM'. This word coined by him characterized Dragon's ethnocentric tradition that guided its relations with the outside world. This peculiar Chinese behavioral pattern grew as a result of its historical humiliating experience of the outside world & the response that was a mix of aggressiveness, assertion & thought process. So, all this got blended in China's ideological & power game resulting in its territorial lust. This was the beginning of Sino-centric Outlook-Tibet & Sino-Indian Border Imbroglio thus becoming early manifestations of this peculiar yet composite culture.

We shall first take the Eastern Sector. The publication of 'The Report of the Officials of India & the People's Republic of China on the Boundary Question ' published in 1961 drew a lot of books, papers, attention & critiques by eminent Historians & Area Specialists. Their scholarly, independent & objective assessments reject as unjustified the huge claims put forth by China in erstwhile NEFA but admit somewhat on Claims made in Northern Ladakh. While doing so, all Treaties & Agreements were studied in minutest details. Both India & China agree that their boundary is a traditional one but Chinese talk of no abstract geographical principle upon which the boundaries are based. The Indian thought has challenged the basis of this argument and held that mountainous terrain remains unaffected by political changes & the National Boundaries follow the Watershed Principle. 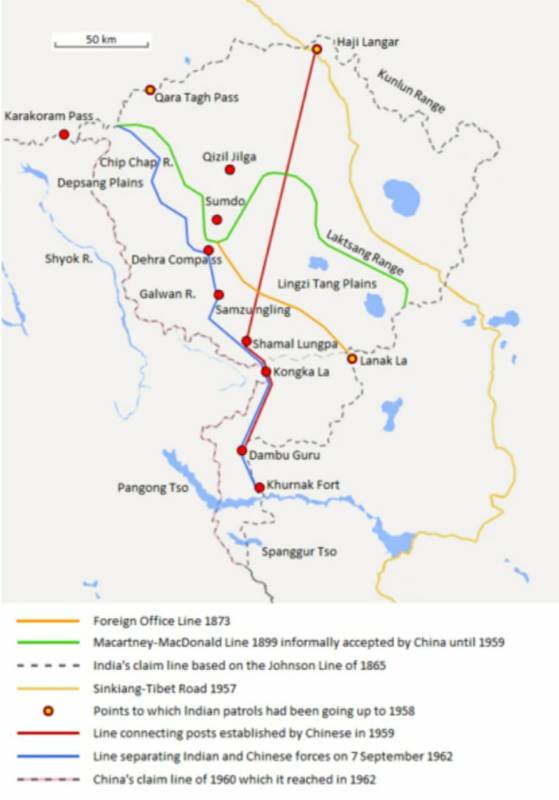 The Great Himalayan Range running right across Kashmir forms no political or natural barrier until it fringes Uttarakhand where it constitutes a watershed. The main range of the Karakoram, despite its great heights, nowhere forms either a watershed or a barrier, for it is cut through by Hunza and Shyok -inhabited on either side by a population of the same stock. The Karakoram Pass, about which there is no dispute between India & China, lies not on the main Karakoram Range but a minor range linking with Qara Tagh. The main Karakoram Range turns South East from a point several miles west of the Karakoram Pass & is not claimed by the Chinese as their boundary.

The Chinese claim line is an irregular one turning south from the subsidiary range on which Karakoram Pass is situated, at a point East of the Pass, & then arbitrarily cutting across the river valleys of the Chip Chap & Chang Chenmo. The Shyok & the Chang Chenmo Basins - both lying beyond the Karakoram are inhabited by Ladakhis. The Qara Qash Valley & the great Aksai Chin are frequented by the Ladakhis.

In so far as the Central Sector is concerned, a perfect watershed line exists, that besides separating ethnic aspects, has also at many places become a dividing line even to the extent of separating fauna & flora on either side. Here, no territorial dispute existed between India & Tibet in the past. In Spiti & Shipki La ( Himachal Pradesh ), there was no dispute, & as far as Barahoti in Uttarakhand is concerned, the only controversy that existed was whether Tibetan Officials could come into Indian territory for taxation of their traders. The same was the issue in the Nilang-Jadhang area (Uttarakhand).These matters had been discussed between the Indian & Tibetan Officials in 1890, 1914 and 1926. The Barahoti question was also discussed between Indian & Chinese Officials in 1958 & a partial agreement reached. China knows today that most of the area disputed by it falls in actual control of India. Should there be a desire on part of the Chinese to settle these issues reasonably, these controversies could be solved easily.

In the Eastern Sector, it is amply clear that the vast claims put forward by the Chinese up to the Inner Line are irrational & illogical & have no basis or deduction. The Inner or Outer Lines have nothing, whatsoever, to do with the real traditional International Boundary. The objections of Dragon to the agreement of 1914 have no legal assent or evidence. The whole world is witness to the fact that Tibet, before 1951, was independent & possessed treaty-making powers. This is the conclusion that the International Commission of Jurists had also arrived. For India, the Indo-Tibetan Agreement of 1914 is far too precious, crucial & important.

Now, what is the real problem? Dragon's behavioral pattern suggests that it does not view the Sino-Indian Imbroglio as a Boundary Problem alone. In 1954 & 1956, China had given specific assurances that their Cartographic Invasions were nothing but the reproduction of Kuomintang Maps & that it would take a reasonable & realistic view of the Sino-Indian Boundary Question. However, by 1959, apparently owing to her expansionist & global designs, it affected a change in China's attitude. China has itself related this change related to ideological & power factors & above all her growing hostility towards India with utter disregard for International Law. In 1960 Sino-Indian -Talks, the Indian Team was simply aghast by listening to underhand plotting of talks & methods of arguments put forth by the Chinese Team, in so much so, that the latter twisted historical evidence as mere assertions in place of historical facts & figures to suit their whims & fancies & concocted line of arguments. Drawing the support of sources of evidence which they had previously rejected as having been drawn from British imperialistic sources is a case in point.

While Dragon was engrossed in treachery, a naive India had remained busy in preparing PANCHSHEEL Papers & celebrating 'HINDI-CHINI BHAI BHAI'- only to be stabbed in back in 1962. It may, however, be recalled that India did make half baked efforts to suggest minor adjustments in the boundary & had even penned these to China in Nov 1959 seeking neutralization of the disputed area in Northern Ladakh pending settlement. In Sep 1962, India had also suggested a definite date (15 Oct 1962) for holding negotiations. Dragon rejected all these & launched a massive invasion in a bid to occupy the areas claimed by it. The rest is history.

If the Sino-Indian Border Problem could not be solved in the last 58 years, it is not that India was lacking efforts to settle it, but because of much deeper & complex factors closely related to Chinese Mindset & International Policies. The great controversy - both internal & external - in which China has been involved during the last few years has put forth many new facets of these policies in a manner hitherto unknown. The quest for power, expansionism & domineering has remained central to the current Chinese leadership with an all too powerful Xi Jinping. Sino-centrism shall thus remain the key to Dragon's approach.

The Sino-Indian Imbroglio is NOT capable of a solution by itself. A conducive political, trustworthy & honorable atmosphere is a must before any efforts are made for a comprehensive bilateral talk to settle the long outstanding imbroglio. A survey of the public opinion of the people of India needs to be carried out to ascertain their views. Citizens of a democratic & free nation may not like to part even with an inch of their legal territory-how difficult or inaccessible that inch may be! Indian Armed Forces are easily the BEST AMONG EQUALS. Well, whenever required, they shall stand up to the occasion as they have done meritoriously in the past.

It must be clear to every Indian now that India & China cannot have business as usual from now onwards. Recent events in Ladakh & elsewhere have shown Dragon in its true colors of deceit, expansionism & domineering. Chinese Foreign Minister Wang Yi had the temerity to blame Indian Army for attacking PLA - a shameful lie! The present Chinese Ambassador to India Sun Weidong has also repeated the same lie!

India continues to take the path of dialogues & diplomacy as she has no interest in conflict. This does not, however, mean that India can be tossed around. If needed, Indian Armed Forces are fully capable to rise to the occasion & give a befitting reply to China.

The entire world is watching the bold stand taken by India. China must realize that it has made grave mistakes & created many enemies in the last 5 months. It has also got entangled in its self-designed cobwebs.

India needs to carry out calibrated diplomatic offensives throughout the world exposing China fully. She should continue to concentrate on rapid economic growth, the building of infrastructures all along the Sino-Indian Border & modernization of her defence forces.

It is high time that India documents her National Strategy & puts it in the public domain. India being the seventh-largest country is also the biggest Democracy of the world. She must be vocal yet dignified in establishing her rightful place amongst the comity of Nations. This would then herald the beginning of a Strategic Culture where accountability & responsibility of all Policy Planners would become visible, transparent & questionable!

KCR serves a warm welcome for Oppn. Presidential nominee and a threat to BJP

How Madhucon Group siphoned off Rs. 1,030 crs through its subsidiary